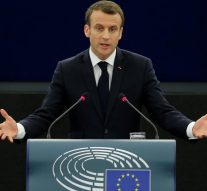 No Comments on A Civil Economic War Among the EU Member States? 33

“We have a context of division within our Europe. That is a doubt in another European countries and after all, we see that among emerged possibilities, a sort of European civil war is currently ongoing. Nationalism and fascinations are here too. So Europe has an ever greater responsibility. I want to share with you two deeply held convictions: first, if we decide to give up on our attachment to democracy and everything that goes with it, we will be in the wrong track; second, we must build a new European sovereignty which will give a clear response to our citizens and show that we can protect them in this changing world.”

On April the 17th, the French President, Mr Emmanuel Macron, addressed the European Parliament plenary. Some would say it was an historic speech. Every single paragraph read by Mr Macron was followed by heavy applauses among the Strasbourg hemicycle. His speech will be remembered as a call for unity, but as well, as a call for a stronger economic and financial union. In this sense the Eurozone and the fiscal discipline were the most important topics. Macron emphasised that reforming the Economic and Monetary Union is another essential area for work before the end of the parliamentary term. He further continued that Europe need a roadmap that will allow us to have a stage approach to the Banking Union and to create a budgetary capacity that will bring more stability and convergence in the Eurozone.

There is a willingness to create a stronger, more unified Eurozone with a single “finance minister”, and a single bank devoted only to the 19 “Euro” countries. The European Central Bank is therefore seeking to strongly urge Member States to harmonize their monetary and fiscal policies, but it is certainly not a supranational body that operates equally throughout the Eurozone.

In his speech, Macron then passed to the budgetary issues. He called for an overall budget reform and demanded, unequivocally, the elimination of all the “rebates” – the quirky cash–back budget gimmicks that were introduced when Margaret Thatcher complained her country was paying too much. “The rebates cannot survive Brexit” he stated. “This budget that we will discuss must express a political project of coherence, efficiency and convergence,” then he said in his speech, adding that “we must not deny any ambition of existing policies, but we must add the new ambitions we carry.”

The election of Mr Macron in May 2017 helped to cement France’s recovery, with the president proposing a series of reforms to the labour market. While almost all respondents were positive on the reforms, economists differed on how quickly they would spur growth in the Eurozone’s second–largest economy. Mr Macron’s economic agenda would be “the single most important reason for the continued Eurozone recovery in 2018” said André Sapir, a senior fellow at Bruegel, a Brussels–based think–tank, and professor at Université Libre de Bruxelles. Laurence Boone, chief economist at Axa Investment Managers, said that the most important short–term impact of Mr Macron’s reforms was their “wow” factor – halting the populist anti–euro wave and spurring confidence in the French appetite for reform.

Many newspapers and other media have not been so positive about the speech, especially in terms of his ambitious economic plans for the European Union and the Eurozone. They criticised his neglecting of national sovereignty in economic and financial (and all other) spheres. Even within the internal affairs, Macron’s ambitions are high, but he has never been supported by the organisations of workers, especially on labour conditions and pension systems. How will the 40 years old President face the challenges ahead of his mandate remains to be seen. What is clear is that he cannot count on such a huge support just because he was against Marine Le Pen in his pre–electoral campaign. The civil economic war among the EU Member States is for sure something Macron must bear in mind when he will act in the future.