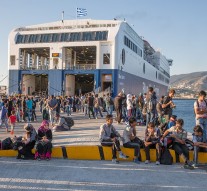 The “one-in-one-out” deal between the European Union and Turkey is not working and is forcing migrants to live in subhuman conditions, in a country where the situation was already very critical.

50,000 refugees from Syria, Afghanistan and Iraq fleeing to safety along with various other migrants are currently trapped in Greece. Unaccompanied children have been protesting for months against being imprisoned in the detention centre of Moria, on the island of Lesvos.

There are 3,000 people living in facilities designed to accommodate a third of that number, with significant shortages of basic shelter and filthy, unhygienic conditions. Innocent people, including children, are locked in prison-like facilities and their future is uncertain. Those who cannot enter in these facilities, sleep on the street.

More than 10,000 people have been surviving for months in the open fields near the border between Greece and Macedonia, mostly through the help of volunteers and the local population.

Nearly 3,000 refugees and migrants are still in the port of Piraeus near Athens, including many women and children sharing several toilet facilities while being fed by people and organisations donating food parcels.

The consequences of the EU-Turkey Agreement on Greece’ Asylum System

The decision on the EU Turkey agreement was followed by the adoption of a law by the Greek parliament that allows blanket “restriction of movement” on new arrivals inside closed facilities at border entry points – such as the islands – for up to 25 days during reception and identification. UNHCR and several nongovernmental aid agencies suspended many of their activities when the hotspots were converted into detention centers, though UNHCR continues to monitor conditions and provide limited services.

Asylum seekers do not receive sufficient information about what the asylum process will entail. This lack of information is even more urgent given that they are detained throughout their application.

Many have received little documentation of their registration or none at all, or have been obliged to sign papers without the help of an interpreter.

What happened to those who came back? Many reported that Turkey rejects migrants coming from Syria at their borders, shooting them or forcibly returning them to their country of origin. Member of the European Parliament have visited Turkey to verify what happens to those that are returned under the deal, including children, and discovered that they are not given the opportunity to apply for asylum and are detained without access to legal assistance.

However, no other returns to Turkey seem to have taken place since 27 April and the situation seems to be still at the moment.