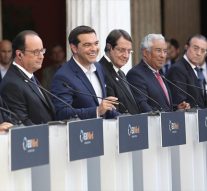 No Comments on Europa, quo vadis? 31

The first six months of 2017 will be marked by the Maltese presidency over the EU, which will complete the presiding trio along with the Netherlands and Slovakia, the member states which were presiding over the Council during 2016. Not only because of the migrant crisis, but due to the fact that many political factors (Maltese presidency) and the economic problems with the southern member states (primarily Greece, Italy and Portugal), the “westernized” overall EU politics, has moved to the Mediterranean region. Does Europe have a new geographical axis of its economic and financial policy? Are we all witnessing a never-ending economy crisis story at the global EU south?

“As we enter 2017 the drivers of growth and demand in Europe I think are going to be shifting quite importantly. Probably the most important one will be easier fiscal policy in Europe”, says Huw Pill, chief European economist, Goldman Sachs Research fellow.

If we exclude services such as broadcasting and wireless microphones, to wireless broadband services, creation of 5G network and work towards an agreement to provide free Wi-Fi in every town, village, and city in the European Union, nothing substantial hasn`t been presented within the presiding plan. It seems that presiding trio project has been left and the Maltese presiding will not bring anything new.

But Malteses tried to rebut this claim by adding the “concrete objectives” of their presidency plan. Just like Slovaks before them, and Dutch also before Slovaks, and so on, to the past. Concrete objectives in economic section are nothing more than a nice list of middle-range ideas, with no clear vision, goals and funds. General phrases and sentences are fulfilling the document with no indication of even timeline of their effectuation. It is up to public to decide when all those objectives will be achieved.

And what happened with the Mediterranean countries? Why the general EU politics is not fully dedicated to those states as well? Greece, Portugal, Italy and Spain were left alone when surviving the biggest financial crises within their modern histories. And the story does not just simply end here. The relationship between the mentioned states and the EU`s institutions is becoming weaker. The European Central Bank is the most specific among them.

For instance, to be eligible for the ECB’s bond buying program and super cheap central bank loans, a Portugal must have an investment grade from at least one of the four credit rating firms. Greek bonds, for example, can’t be purchased via the program, because the country has junk ratings from all four. The ECB, however, has granted a waiver that allows Greek banks to use the country’s sovereign debt as collateral for cheap financing.

Its deficit stood at 4.4% in 2015, above the 3% level accepted under EU rules, but a potential penalty was wavered due to “exceptional circumstances”.

“To avoid conflict with the European Commission and minimize the risk of a rating downgrade, the national governments will need to announce new austerity measures”, claims Capital Economics magazine.

Italy has rejected the proposal of new Constitution in referendum held at the beginning of December 2016. The Italy has passed through the economic crisis as well, and fortunately not big negative consequences occurred.

In 2016, the EU leaders of Mediterranean states have gathered in Athens to discuss on the need to economically boost the region. They adopted a Declaration, in which they emphasize the need for  “…foster investment by doubling the financing capacity of the European Fund for Strategic Investment (“Juncker Plan”), focusing on key priorities such as digital economy, low-carbon projects for energy, including energy interconnections and transport, infrastructure as well as research and training”.

The second part of 2017 presiding period will be carried out by Estonia. It will be succeeded by Bulgaria. Will all those two countries also provide a list of “concrete objectives”, or the objectives will be indeed concrete, remains to be seen.