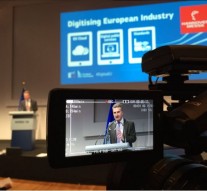 On 25 April, Commissioner Oettinger  presented to politicians, stakeholders and interested parties the Digitising European Industry package in Hannover, during a high-level conference.

The new plans will support and link up national initiatives for the digitisation of industry and related services across all sectors, as well as boost investment through strategic partnerships and networks.

Concrete measures are also proposed to modernise public services and to speed up the development of common standards in areas of primary importance, such as 5G communication networks or cybersecurity.

These plans also includes the settting-up of a European cloud, intended to provide 1.7 million researchers and 70 million science and technology professionals across Europe with a virtual environment to store, manage, analyse and re-use a big amount of research data.

As Andrus Ansip, Vice-President for the Digital Single Market said: “The industrial revolution of our time is digital. We need the right scale for technologies such as cloud computing, data-driven science and the internet of things to reach their full potential. As companies aim to scale up across the Single Market, public e-services should also meet today’s needs: be digital, open and cross-border by design. The EU is the right scale for the digital times.”

Although many parts of the economy have been adopting quickly digital technologies and processes, traditional sectors such as construction, agro-food, textiles or steel, as well as SMEs are particularly lagging behind in their digital transformation.

“Europe has a very competitive industrial base and is a global leader in important sectors,” says Günther H. Oettinger, Commissioner for the Digital Economy and Society, “But Europe will only be able to maintain its leading role if the digitisation of its industry is successful and reached fast. Our proposals aim to ensure that this happens.”

In brief, if they want to be competitive globally, all European industries, regardless of a company’s size and sector, must fully use digital opportunities.

Digitisation of products and services will add more than €110 billion of revenue for industry per year in Europe in the next five years, estimate recent studies.

Several EU Member States have already launched strategies to support the digitisation of industry, but it is necessary to adopt a comprehensive approach at European level if Europe wants to avoid fragmented markets and to reap the benefits of digital evolutions such as the internet of things.

For this reason, the Commission will set up a governance framework with Member States and industry and maintain a continuous EU-wide dialogue with all actors involved, so to  help the coordination of national and regional initiatives on digitising industry.

Besides encouraging the use of the opportunities already offered by the EU Investment Plan and European Structural and Investment Funds, a focus will be put on investments in EU’s public-private partnerships.

The Commission will also establish large-scale pilot projects in order to strengthen internet of things, advanced manufacturing and technologies in smart cities and homes, connected cars or mobile health services.

In order to support the free flow of data and clarify ownership of data generated by sensors and smart devices, the Commission will adopt a “future-proof legislation”. Rules on safety and liability of autonomous systems will also be reviewed.

Broadly speaking, the Commission intends to present an EU skills agenda, so to help people with the skills they need for jobs in the digital age – such as the European cloud initiative, intended to help Europe leading in the data-driven economy.

Overall, €50 billion of public and private investments should be mobilised in support of the digitisation of industry.

“It requires a joint effort across Europe to attract the investments we need for growth in the digital economy,” says Günther H. Oettinger, Commissioner for the Digital Economy and Society

Common Standards to Allow Billions of Devices to Communicate Safely

The Commission has proposed concrete measures to speed up the process leading to standard setting, so to allow billions of phones, computers and sensors to communicate safely and seamlessly in the Digital Single Market – regardless of their manufacturer, technical details or country of origin.

On one hand, when asking industry and standardisation bodies to work on standards, the Commission has found five priority areas, namely 5G, cloud computing, internet of things, data technologies and cybersecurity.

On the other, in order to ensure timely delivery of standards to spur innovation and business growth, the Commission will co-finance the testing and experimentation of technologies to accelerate standards setting including in relevant public-private partnerships.

This approach aims to accelerate the development and adoption of technologies such as smart grids, mobile health services, connected vehicles and other sectors.

The Commission suggested 20 measures – to be launched by the end of 2017 –  in order to modernise digital public services and make the EU a better place to live, work and invest.

A digital single gateway will be set up, which will enable users to obtain all information, assistance and problem-solving services they need to operate efficiently across borders.

The commission also plans to interconnect all business registries and insolvency registers and to connect them to a e-justice portal.

A pilot project with administrations will be launched, so to allow companies to provide paperwork to public authorities in only one EU country, even if they operate in other EU Member States. This is called the “once-only” principle.

The transition to e-procurement, e-signatures and implementation of the “once-only” principle in public procurement will also be accelerated.

This set of initiatives is the first industry-related package under the Digital Single Market strategy, which includes 16 initiatives to be presented by the end of this year.

Announced by President Juncker in Paris in October 2015, it follows a first set of proposals adopted in December 2015 on copyright, digital contracts as well as draft decision on spectrum coordination in February 2016.

At the moment, the Commission is working to support industry with ambitious projects such as the Single Market Strategy, Investment Plan, Energy Union, Capital Markets Union and Circular Economy.