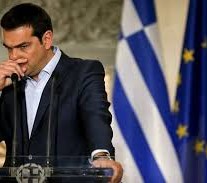 No Comments on Greek crisis: basis for a new deal still exist 31

Despite the hard attitude of many European capitals after the rejection of the bailout proposal,  today the Greek government will have the final chance to propose a deal on reforms to its creditors.

Indeed, following their meeting in Paris, French President Hollande and the German Chancellor Merkel said it was “urgent” to have precise proposals from Greece over a bailout deal, before Greek banks face running out of money.

Thus, Alexis Tsipras and the new Minister of Finance, Tsakalotos, are expected to present today new proposals at the Eurozone emergency summit on Greece’s growing debt crisis. While prepared to accept many of the demands made by Greece’s creditors, Tsipras will probably ask for more gradual implementation of some reforms and substantial debt relief.  As matter of fact, the plan is said to include a demand for Greece’s debt to be cut by up to 30%.

In view of the Eurozone meeting, Tsipras has also tried to adopt a more conciliatory position in order to win back the favour of the European leaders. To this aim, he also persuaded all Greek parties, except the communists and far-right Golden Dawn party, to release a joint statement on Sunday’s referendum.

“The recent verdict of the Greek people is not a mandate for rupture, but a mandate to continue and strengthen the effort to reach a socially fair and economically viable deal,” the statement said.

Nevertheless, scepticism remains and leaders in many European capitals, in particular Berlin, said that they would not come with new proposals today, but they will decide how to proceed after examining Greek’s offer.

In this regard, the European Commission President, Jean Claude Juncker also gave few remarks to make clear his position: basis for a deal with Greece still exist, but he plays down the chances for achieving a deal today.

“The citizens of Greece have spoken and I’d like to understand what they said. A question was put to the Greek people about something which doesn’t exist.” he said, arguing that the creditor’s proposal for a bailout programme expired on the 30th June and there’s no long anything to sign.

Furthermore, echoing other European leaders, Juncker declared that now it is up to Greece to make proposal. Nevertheless, a rapid solution will not easy to reach: “Europe is all about compromise and compromise takes a while to achieve [….. ] Now it’s time to get round the table again. That is the obvious course to follow and we have to find a solution“.

In this context, the Eurozone leaders have also shown their distrust. Valdis Dombrovskis, the European Commission Vice president in charge of the Eurozone policy, stated that the “No vote” widened the gap between Greece and the other Eurozone countries; thus preconditions for an agreement do not currently exist.

So far, it remains unclear if there is anything new on the table; but probably, as European sources say, Tsipras will request for a 7 billion euros ‘bridge loan’, in order to cover overdue debts and loan payments.

Meanwhile, according to governmental sources, most likely Greece’s banks will remain shut until Thursday. The ECB has agreed on Monday to keep emergency assistance to Greek banks at its frozen level. Nevertheless, the ECB’s Governing Council has decided to ” adjust the haircuts on collateral accepted by the Bank of Greece” for emergency liquidity assistance. This decision, which reflects the perception of the increased risk, also reveals the division between Eurozone’s governments and the difficulties for the ECB to make a choice before the emergency meeting.

Indeed, the ECB should assess if there is still a change for Greece and its creditors to reach a deal on future reforms, before deciding whether to increase or cut off the lifeline for Greeks banks.