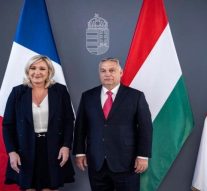 Immigration is always an important question in European politics. French Presidential elections are nearing (April 2022) and it is high on the political agenda.

The leader of the French extreme right, Marine Le Pen, proposed last week that the term “national priority” be included in the Constitution, that the right to land be abolished, which allows foreigners to obtain French citizenship, and that only French people receive family allowances. Le Pen, who announced her candidacy for the presidential elections in the spring of 2022, could, according to public opinion polls, enter the second round of elections.

“Will France remain France or will it be carried away by an uncontrolled torrent of huge migration flows that will endanger our culture, our values ​​and our way of life,” the candidate of the extreme right-wing party National Gathering asked. Marin Le Pen, who lost in the last presidential election in 2017 to the current president, the centrist Emmanuel Macron, proposed a law on “immigration control”, which would be decided in a referendum.

The far-right leader told reporters that she has three goals of immigration control, protection of French citizenship and supremacy of the French Constitution on international law, so the Constitution should be above the European Convention on Human Rights or the European Court of Justice. According to her, certain benefits, such as family allowances, should be received only by the French. Le Pen believes that all “foreign delinquents” should be expelled from France, while the right of foreigners to obtain French citizenship should be enabled only under strict conditions of data verification and with a request for their assimilation.

In 2015, criticizing European policy towards immigrants, Le Pen told French radio Europe 1 that France should return immigrants back to their countries of departure so that “smugglers know that no immigrants will land on (French) shores”. European ships rescued almost 3,690 immigrants from the Mediterranean Sea in one day alone. At the same time, Le Pen expressed concern over the reception of a certain number of migrants in France, because, as she believes, it represents a “signal of the opening of national borders”.

“Of course, I am satisfied that the migrants are alive and healthy, but I am extremely worried, because the arrival of migrants is a signal of the opening of our national borders at a time when Italy has taken a more serious stance and said that is enough,” Le Pen said. The president of the National Rally alluded to the statement of the Minister of Internal Affairs of Italy, Mateo Salivini, who did not give permission for the ship to enter an Italian port, which provoked criticism from many European leaders, especially French President Emanuel Macron.

Hungarian conservative Prime Minister Viktor Orbán and French far-right leader Marina Le Pen spoke out in Budapest at the end of Octover against the EU’s “ideological brutality” and “immersion of Europe in migrants”. “Hungary, under your leadership, is once again at the forefront of the struggle for the freedom of the people in 2021,” the French presidency candidate said at a joint press conference with the Hungarian prime minister. “In October, our thoughts lead us to the heroes of the 1956 uprising,” Le Pen said of the uprising against the Soviet-backed communist regime of the time. In front of journalists, Le Pen and Orban together sharply criticized the “ideological brutality” of the European Union, rejecting any principle of the primacy of European law over national law, which strongly sided with Poland, which is leading such a dispute with Brussels.

“This principle is imposed by maneuvers, and the Polish judiciary fully justifies its right to determine and implement the basic rules of its national pact,” Le Pen said. “Threats of sanctions, exclusion, are rare violence against Hungary and Poland,” she added. Le Pen criticized “the centralized government of Brussels, intoxicated by its own existence and omnipotence.” Both Orban and Le Pen sided with the Alliance of Nations, a new right-wing group.