Home / External Relations / The fight between ISIS and EU: who is winning right now? 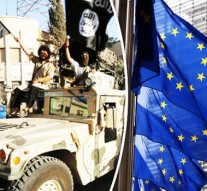 No Comments on The fight between ISIS and EU: who is winning right now? 303

From the formation of ISIS, the EU as a whole and its single member countries were highly involved in combating this terroristic organisation. There were ups and downs for both sides. There is an analysis: who is leading the game right now?

“U.S. Grand Strategy: Destroying ISIS and al Qaeda” report  names ISIS and Al Qaeda the biggest threats to the world security, as well as to the main values of American and European citizens.

The offense of ISIS and EU

With European disintegration tendencies and the rise of nationalism in many countries, ISIS leaders feel relief, as a weaker Europe suits them. Lately, ISIS propagandistic newspapers celebrated Brexit. As one of ISIS supporters stated: “At a time when Muslims are uniting under the flag of the Caliphate, Europe is choosing to divide and split.”

With more refugees coming to the EU from conflict zones like Syria, European commonwealth becomes every time weaker; more and more countries, especially Eastern ones, are against Muslim immigrants on their lands. The rise of far right nationalistic parties all over the EU is unprecedented; they evoke people’s fear of foreigners and are strongly against the European project. As the war with ISIS goes on, more people flee from its territories; and more Europeans are becoming unwilling to accept them in. Tensions between the EU’s members become stronger, which does not help in solving the ISIS problem.

ISIS propaganda and recruitment on the internet is a powerful mechanism. Because of this, many Europeans make a decision to join terrorists in their offense against the global order. Even some European women decide to travel to the war and become wives of ISIS soldiers. Presently, ISIS recruitment on the internet has very strong network; and with all its attempts, the EU is still unable to stop this process.

Some time ago, ISIS war had reached the European continent. The latest biggest ISIS terrorist attacks in the EU were November 2015 Paris attacks when 130 people were killed and 368 injured; and March 2016 Suicide Bombers attack a Metro station and an Airport in Brussels, where 32 people were killed and 316 injured. However, attacks in a close neighbour and a NATO member country – Turkey – also evoke fear in European hearts. The June 2016 attack in Istanbul airport killed 44 and injured 239 people.

The EU’s actions against ISIS

The EU and its single member countries participate in US-led international coalition fighting ISIS. France and Britain, as countries with bigger military capacity, were involved in combating Muslim extremists the most. After the United States, France was the most active state fighting terrorism militarily and politically. At the moment, France, Britain, the Netherlands, Belgium, and Denmark are participating in direct airstrikes against ISIS in Iraq. From the other side, Germany sent its paratroopers for conducting military training in Iraq, and Kurdish militants are being trained in Germany. The United Kingdom, Portugal, Spain, and Italy have also participated in the trainings. France, Germany, the UK, Estonia, the Czech Republic, Hungary, and Albania have supplied direct military assistance, while many other countries have provided financial support. The EU relies on the United States for targeting and it is not striking targets in Syria.

The EU’s low military spending was always a problem. US has been struggling for more military funding in European countries for years. Only 5 out of 28 NATO members give 2 % of its GDP to army. In the situation of such instability in the Middle East, the problem rises again.

Therefore, what we have is underfunded European defence budgets, consequently the capabilities gap continues to widen. The US leadership is still unquestionable, the country is responsible for the lion’s share of the world effort against ISIS in Iraq (around 75 % of strikes as of January this year).

Present policy of the European Union in fighting ISIS needs a lot of improvement. The Union as an organisation does not possess its military forces, so its members can participate in international military coalitions alone or under NATO scheme. It should be remembered, that the EU’s External Action Service is constantly developing and European foreign policy is a very difficult issue.

European citizens feel threatened and international terrorism is already operating within the European continent. Latest migration policy has many flows, which put many nations even against the whole European project. Moreover, every weakness of the EU plays good for ISIS. As European military budgets luck funds, it is America who takes the leading position in fighting ISIS.

Changes are needed to be made. To maximise effectiveness and efficiency, transatlantic partners need to focus on enhancing and integrating capabilities, particularly in target acquisition. The most challenging is that the war against ISIS is not going to end anytime soon. It will be a test in sustaining the EU’s capabilities, resources, and public support. In this situation, strategic patience is needed.