Home / Energy / The house is on fire 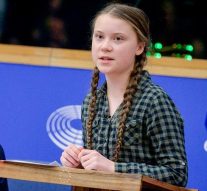 No Comments on The house is on fire 72

Greta Thunberg, a 16-year-old girl from Sweden, has been campaigning tirelessly about climate change for years. Last week, she stood up in European Parliament to criticise MEPs for their lack of action on the issue.

Following her recent speeches at the World Economic Forum and the UN Climate Change Summit, climate change activist Greta Thunberg has turned her attention to Europe.

In a passionate speech at the European Parliament last week, Greta slammed MEPs for their inaction on climate change.
She also noted how quickly politicians reacted to the recent fire in Notre Dame Cathedral in Paris. “The whole world witnessed with sadness and despair the fire at Notre-Dame, but Notre-Dame will be rebuilt,” she said.
“I hope it has strong foundations and I hope we have strong foundations,” she added, “but I’m not so sure”.

Speaking Greta told politicians, “I want you to act as if the house was on fire.

“A great number of politicians have told me that panic never leads to anything good, and I agree. To panic, unless you have to, is a terrible idea. But when your house is on fire, and you want to keep your house from burning to the ground, that does require some level of panic.

“Our leaders need to start acting accordingly, because at the moment, they are not…”
“We are in the midst of the sixth mass extinction, and the extinction rate is 10,000 times faster than what is considered normal,” she said tearfully, “with up to 200 species becoming extinct every single day.

“Erosion of fertile topsoil, deforestation of our forests, toxic air pollution, loss of insects and wildlife, the acidification of our oceans; these are all disastrous trends being exhilarated by a way of life that we, in our financially fortunate part of the world, see as our ‘right’ to simply carry on.”

The teenager went on to criticise Europe’s decision to waste so much time on Brexit. “Our house is falling apart and our leaders need to start acting accordingly, because at the moment, they are not,” she said.

“If our house was falling apart, our leaders wouldn’t go on like they do today. You would change almost every part of your behaviour, as you do in an emergency.

“If our house was falling apart, you wouldn’t hold three emergency Brexit summits and no emergency summit regarding the breakdown of the climate and the environment.”

Next, Greta asked MEPs to realise that it is her generation who will be most affected by climate change. She added how, at the age of 16, she does not have a vote to impact government proceedings. She called on them to use their votes wisely, for young people like her.

“The EU elections are coming up soon, and many of us who will be affected the most by this crisis – people like me – are not allowed to vote. Nor are we in the position to shape the decisions of business, politics, engineering, media, education, or science.

“In this election, you vote for the future living conditions of humankind…”
“The time it takes for us to do that does no longer exist. That is why millions of children are taking to the street; school-striking for the climate, to create attention for the climate crisis.

“You need to listen to us, we who cannot vote. You need to vote for us; for your children and grandchildren. What we are doing now can soon no longer be undone.

“In this election, you vote for the future living conditions of humankind.”

Whatever one thinks of Greta, the environmental issue is “The issue” for future generations: it’s a matter of fact that the “house is on fire”, that a worldwide action to limit pollution and adopt sustainable economic and life style is needed.