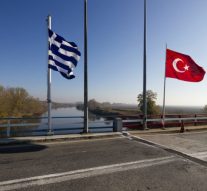 No Comments on What a timing to scrumble EU leaders 36

Turkish President Recep Tayyip Erdoğan said on March the 11th that he would keep Turkey’s border open for refugees until the EU had met all his demands, while comparing Greece’s response to the crisis to the Nazis. “Until all Turkey’s expectations, including free movement, … updating of the customs union and financial assistance, are tangibly met, we will continue the practice on our borders,” he said in a televised speech.

Turkey’s decision on the 29th of February to re-open its border with Greece for refugees sparked a row with Brussels, as well as harsh exchanges with Greece. Greece has tear-gassed thousands of migrants trying to break through and been accused of beating and stripping migrants of their belongings if they made it across the border. “There is no difference between what the Nazis did and those images from the Greek border,” Erdoğan said[1]. Greece has denied using violence and accused Turkey of pushing desperate people into dangerous attempts to enter Europe.

An Italian MP said “what we think of Erdogan we must apply to ourselves”[2]. Which applied to this statement by Erdogan, doesn’t mean that Greece can be compared to the Nazis, of course, but it certainly frame the absolute lack of humanitarian approach to the refugee crisis, from 2015 on. Could Erdogan choose a better time to puzzle European leaders and get more from his deal with them, than at times of a global pandemic? Hardly so. As usual, he played with a jaw dropping tactics that will probably help him to get what he wants. European leaders should be judged as harshly as Erdogan for every decision they made against the humanitarian support of migrants, not for concessions to the Turkish autocrat as such. Nevertheless, will they be strong enough this time to confront him and overcome the impasse?

Before the adoption of strict prevention measures in many European countries, along Italy regulations, German Chancellor Angela Merkel and French President Emmanuel Macron were set to meet with Turkish President Recep Tayyip Erdoğan in Istanbul on Tuesday 17th of March to reach an agreement on the ongoing refugee dispute[3]. We don’t yet if the meeting is still planned to go ahead, but Merkel criticised the fact that the funding allotted to his government under the 2016 agreement has yet to be paid in full, unveiling the tactics behind his timing. Chancellor Merkel said on Monday (9 March) she was in favour of “taking the EU-Turkey agreement to a new level”, which would “order, control and reduce flight and migration.” An updated agreement is expected to be reached by the next EU Council meeting (supposedly to take place on the 26th of March).

In the meantime, tensions between Greece and Turkey reminds us that history imbued that border with conflicts that will need the political convergence of the two countries to be healed. Programmes for civic education and dialogue along that border would be way more helpful than more billions to keep refugees segregated. May the pandemic help EU leaders to be farsighted!