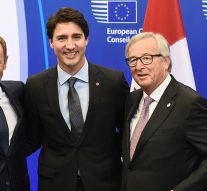 Free trade and enhancement of foreign investments keep being key objectives for economic growth within the European Union. Brexit referendum highlights even further the need to strengthen free trade in order for the EU to maintain its position of second biggest market in the world economy.    Transatlantic Trade and Investment Partnership (TTIP) between EU and United States of America, and Comprehensive Economic and Trade Agreement (CETA) between EU and Canada, are thus a crucial strategic priority in this historical period for the EU growth, by eliminating barriers for trade, attracting foreign investments and creating new job opportunities. On the one hand, as regard EU-Canada negotiation for CETA, much work has been done and despite some hurdles the deal has been signed during European Union-Canada leaders summit on 30th October by Canadian prime minister Justin Trudeau, President of the European Council, Donald Tusk and President of the European Commission, Jean-Claude Juncker.
On the other hand despite many years of negotiations a stalemate seems to be a concrete scenario, at least in the short period, as regards the deal between the EU and the US: hopes that TTIP is going to be signed before US president Barack Obama leaves the White House in January have gradually disappeared. Furthermore Donald Trump is openly against trade deal, which he consider as a globalization effect and a threat toward national production and US job market.
Also for these reasons many experts said that it is hard for TTIP talks to resume in 2017: “The window of opportunity for getting TTIP done was before we got into the US election campaign, and certainly before the French and German elections got under way in 2017. I think that window of opportunity is now closed”, said John Springford, head of research at the Centre for European Reform, quoted by the British newspaper “The Guardian”.
Meanwhile, waiting for the United States, “Liberty moves north” we can say quoting a recent editorial published by “The Economist” that refers to Canada signing CETA as an “example to the world”.
Canada is committed to deepening trade and investment links with new and traditional partners: negotiating trade agreements, such as CETA will benefit canadian citizens, create new job opportunities, and help to grow the middle class. Those are the main reasons why, according to a statement of Canadian government, prime minister Justin Trudeau signed Ceta with the EU leaders. Ottawa’s clear stance is demonstrated even by another deal signed on 30th october: the Strategic Partnership Agreement, aimed at enhancing cooperation in sectors such as energy, environment and climate change, migration, counter-terrorism, international security, and effective multilateralism.
Just to give some numbers the CETA agreement should benefit nearly 550 million EU and Canadian citizens, with a potentially consistent economic impact. From the first day of its implementation, Canada will eliminate duties worth 500 million euro for goods originating in the EU. As the EU Commission highlight, in the four years after the agreement with South Korea came into force EU exports to that country rose  in goods by 55%, and in services by over 40%. For Canada-EU relations the impact could be even bigger. Furthermore through CETA, EU companies will be able to bid for public contracts in Canada at all levels of government. CETA also removes barriers for investors wishing to enter the Canadian market, while the agreement  ensures that all European investors in Canada are treated equally and fairly. Canada-EU deal will bring new opportunities for European companies by creating access to the Canadian market in key sectors such as: financial services, telecommunications, energy and maritime transport.
Those are just some key point that could be reached through the agreement, that for sure represent a clear message of thrust in multilateralism, free trade and cooperation, so much needed in this historical time when the EU is threatened by Brexit and euroscepticism.
CETA EU EU Commission United States