Home / Future Europe / Wanted! A vision for the Future of Europe 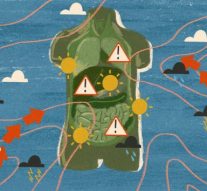 No Comments on Wanted! A vision for the Future of Europe 37

Ebola bursted out of bats that found a new heaven in the palm trees planted to supply the increasing demand of the industry. Those palm trees needed room and deforestation provided the solution. However, it also provided the heaven for bats, that transmitted ebola to the local people, who would cook them for dinner. And who would die out of it.

What does this have to do with the Coronavirus? We don’t know. Yet we know, and the ebola crisis tragically proved, that we live in an ecosystem and no piece can be moved without consequences there or somewhere else. We also live in a globalised society, where any of these consequences would happen at a faster pace than if people across the world weren’t communicating this intensively.

The sudden awareness of European decision-makers of climate change is undeniably a belated but good news. Because acknowledging that we must respect the planet boundaries for our survival means also paving the way for understanding the level of interconnectedness of the web of life. Which includes health and the healthcare system.

The European Green Deal sounded incredibly extensive to a vast majority. And yet, the Coronavirus shows us how just one bit of the policies encompassed by it can be enough for a global crisis to outburst. Climate change is also about this. Just like international relations, in a way – imagine if China was not cooperating? Oh wait, it did back to the SARS crisis, and 800 people died. Also because China kept the pledge secret for a while. International relations are a fundamental part of the design it takes to mitigate climate change just enough for humankind to survive it (which is to say, by the way, to survive itself).

The EU just historically lost a Member State that is responsible for a good chunk of the history of Europe. And it happened due to superficiality and lack of understanding of the what emotions were rooting among Brits. And not Brits only.
It was this very event that kicked-off the debate on the future of Europe, now revived again by this Commission. It’s another final call (!) for a common external action and diplomacy, that is needed for the future of Europe as much as for the future of humankind. Because we simply cannot afford to be bystanders, while much more impulse to mitigating climate change may come from the EU. In the form of aids like now for China, yes, but even more in the form of diplomatic historic effort to lead for real, not only for front pages, the political global leap making sustainability happen.

The coronavirus and the European Green Deal are two very different things. Yet they are not apart. The future of Europe must be able to span both, thanks to a deep understanding of societal, environmental and economic shares at stakes and thanks to a vision that is innovative enough to enact transformative changes. We used to need visions for progress. It is now a matter of  surviving.