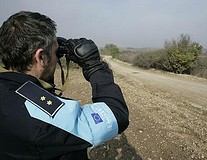 No Comments on Border surveillance operations: an adequate response? 44

The violence perpetrated in Syria and, more recently, in Iraq, prompted thousands of people to leave their country. Most asylum seekers – from Africa but also from the Middle East – leave by boat from Libya, where intensified fighting between rival tribes and government instability facilitate the business of criminal organizations.

Frontex reported that while in 2013 a steel boat carried 70 people, the same boat (they are often reused) is carrying today around 400 people. This cruel exploitation increased the risk of accidents. In fact, notwithstanding the continuous surveillance carried on by Mare Nostrum, IOM reported that in 2014 more than 3000 people died in the Mediterranean Sea, four times more than in 2013. Accidents happen mostly near African coasts, where Mare Nostrum boats have access.

Mare Nostrum has greatly contributed to assist ships in distress, but it seems that criminals are now relying on the constant presence of these vessels to use worst equipment and less fuel, thus explaining why the number of accidents increased instead of decreasing.

In November, border management (which costs 10M euro per month) will be supported by the Joint Operation Triton, coordinated by Frontex, with a budget of 2,9 M per month. However, for the moment, the operation has received contributions only from half of the Member States.