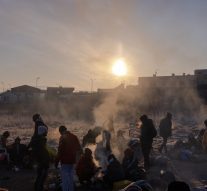 No Comments on Current figures of migrants from Ukraine 13

According to information compiled by UNHCR, 7.8 million people have been evacuated from Ukraine into Europe. About 19 percent of all Ukrainians fall under this category. Approximately 15.4 million people left Ukraine, but 7.7 million have subsequently come back. The largest exodus happened on March 7, when more than 200,000 individuals left Ukraine in a single day. Since that time, the number of refugees leaving Ukraine has decreased; most recently, 36,000 people per day were leaving the country. By early November, there were almost 31,000 individuals returning to Ukraine per day, up from about 20,000 at the end of March. 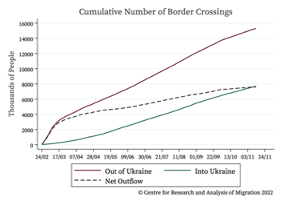 Across total, 4,7 million Ukrainian refugees have applied for Temporary Protection or comparable national protection programs in Europe. According to UNHCR data, the majority of refugees (63 percent) say they intend to remain in their current host country in the foreseeable future for a variety of reasons, including safety, family ties, the asylum process, and jobs. Only 13% of respondents say they have plans to visit Ukraine again in the near future, while 70% are unsure of the exact date. The feeling that things have changed is the primary driver of the wish to return, followed by economic considerations and a desire to return home and be with family. 10% of respondents say they have intentions to relocate to a different host nation, while 14% are unsure. A majority of respondents (56 percent) are residing in hosted or rented housing, while only 29% are still doing so at collective sites, planned sites, or reception or transit centers. 14% of respondents have family living in their host nation. The top three immediate requirements listed by respondents are money, work, and housing. The preference of respondents is to learn about employment opportunities and financial aid programs, followed by information on medical care and legal status.

The most common citizenship among victims of trafficking abused in the Russian Federation and in Poland, according to data gathered by Counter Trafficking Data Collaborative (CTDC) partners between 2002 and 2021, was Ukrainian. 63 percent of the 11,210 victims of trafficking in Russia were Ukrainian nationals. 86 percent of the 2,460 victims of trafficking in Poland were Ukrainian nationals (CTDC, 2022B). The large number of Ukrainians who have fallen victim to trafficking in Poland and Russia raises the possibility that these two neighbors serve as a conduit for intraregional trafficking. With more Ukrainians likely to escape and more than 7.4 million refugees from Ukraine reported across Europe between 24 February and 22 September 2022 (UNHCR, 2022), there is a strong risk that Ukrainians may become victims of human traffickers (IOM, 2022). The Czech Republic, one of the closest countries, has taken in 390 000 Ukrainian migrants so far, making it the third most popular EU destination for those fleeing their home nation and the nation with the most Ukrainian refugees per 100,000 people. Not all immigrants, nevertheless, choose to settle in Europe. The Canadian government estimates that throughout the crisis, more than 117000 persons fled from Ukraine to Canada. Additionally, a large number of refugees arrived in the USA by air.