Home / Economy / A devaluation of the hegemon: US withdrawal from Afghanistan 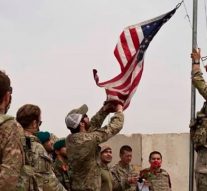 No Comments on A devaluation of the hegemon: US withdrawal from Afghanistan 74

In several days the world will commemorate exactly two decades since the terrorist attacks occurred on the Twin Towers in New York and the Pentagon. The world has watched in horror the way the terrorist acts were brutally executed, as well as the US response that followed a few weeks after the terrorist attacks – the Invasion of Afghanistan. This short analysis casts an argumentation of the USA devolution from the “superpower” throne, after the withdrawal from Afghanistan and with the increasing digital and technological supremacy coming from its opponent – China.

The beginning of this Century was the culmination of American imperialism and politico-economic domination in the unipolar era, supported by most countries. Twenty years later, the world is appalled by the withdrawing of the American troops allowing the Taliban to regain hold of power and control most of the territory of Afghanistan.

Former US President Donald Trump criticized President Joseph Biden for the way in which American forces are withdrawing, calling the whole action “America’s greatest humiliation in international politics”. Trump, who is considering the possibility of running for president in 2024, blamed Biden for the fall of Afghanistan into the hands of the Taliban. This situation imposes a simple dilemma: did the USA irreversibly lose any of its capabilities and title of the global superpower with this act?

The theory of hegemonic stability, originally developed in the field of economics by Charles P. Kindleberger, offers the most comprehensive understanding of this phenomenon, which was soon modified and widely accepted in the analytical framework of international relations. At the systemic level, the theory assumes the existence of a hegemon (always one) characterized by an ever-growing and strong economy, exceptional technological development, and superiority in the field of technology, as well as commitment to the system.

This author requires the cumulative fulfillment of all the conditions, so that the projection of power and commitment in relation to the system or most of it is, therefore, a conditio sine qua non for assigning the attribute of “hegemon” to the leading state of the system. Some experts note that in the period between the Second World War and the 1970s, the role of the United States as a hegemon was indisputably clear, and until the fall of the Berlin Wall it was obscured by the competitiveness of the second bloc led by the then USSR. With the emergence of the unipolar model of organization of the international system, the United States became the hegemon of the system as the only remaining superpower.

According to the assumption of this theory, the system needs a hegemon that can legitimately use force in case of significant disruption of the system, which is why the era of unipolarity was seen as an empirical achievement of hegemonic stability. Therefore, in practice, it is almost impossible to separate hegemony from any other form of organization of the international system except unipolarity, because the key segment of determining unipolarity is the projection of power. In an effort to maintain an “order” based on its own understanding, the USA, in an era of unipolarity, along with its allies, often resorted to unilateral use of force to discipline “rogue” states.

The ultimate rise of the PR China, followed by the strong role that Russia (and even the EU) preserved, has promoted the international system from unipolar to a certain type of multipolarity. Despite disagreements among the scholars and experts on whether the contemporary international system is radically shifted from unipolar to multipolar, or to some variation of the “soft unipolarity”, the hegemonic role that the USA maintained for more than two decades has already faded away.

In parallel, China pledges to establish a global digital supremacy through its so-called “Digital Silk Road”. The way in which entities with different capital representation (public, private, public, or otherwise) will cooperate differently with national governments along the Belt and Road is one of the central issues for future studies of digital, and aspects related to the development of modern communications.

Due to China’s non-aggressive and non-military presence around the world, it is often granted the status of a benevolent (benign) hegemon. However, as China has not been a dominant superpower in recent history, it is difficult to predict whether the expansion of its domain of dominance to various fields will be accompanied by an increased military presence. Therefore, modern technological development is potentially a “new unknown” in the equation of hegemonic competition, which may not produce, for the first time, a classic political-military dominant leader in the international system.