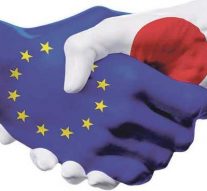 The European Union and Japan are increasing their cooperation in several fields, despite geographical and cultural distance. Growing protectionism among some countries in the world is apparently not affecting the relations between Eu and Japan. On July 2018, the European Union and Japan signed an Economic Partnership Agreement (EPA), one of the biggest trade agreement ever negotiated by the EU that aims at creating an open trade zone covering over 600 million people. The EU and Japan’s Economic Partnership Agreement entered into force on 1 February 2019 and contains “a number of provisions that will simplify trade and investment procedures, reduce export and investment related costs and will therefore enable more small firms to do business in both markets”. A “new era for Japan and the EU is about to begin,” the Japanese Prime Minister told reporters following the announcement of this agreement. His joint statement with European Commission President Jean-Claude Juncker stressed the “strategic importance” of the agreement, while European Commissioner for Trade Cecilia Malmström praised the deal as a “win-win agreement.”
It could be highlighted that EU firms already export nearly 70 billion euro in goods and 28 billion euro in services to Japan every year. The EU-Japan economic agreement will remove 97% of the tariffs that Japan applies to European goods and 99% of those applied by the EU. It is estimated that EU companies will save €1 billion a year in duties which they currently pay when exporting to Japan. A number of longstanding regulatory barriers, for example on car exports, will also be removed. This agreement removes tariffs and other trade barriers and creates a platform to cooperate in order to prevent obstacles to trade; it helps to shape global trade rules in line with high standards and shared values, and; sends even a signal that two of the world’s biggest economies reject protectionism.  As an important country of 127 million people, Japan holds potential for EU firms to export even more. The agreement will also open up the Japanese market of 127 millions consumers to key EU agricultural products and increase EU export opportunities in many other sectors such as financial services.
The EPA will gradually enhance the economic ties between the two major economies and set global standards for third countries with which they trade. But the benefits of the agreement extend beyond trade: the EPA and the other agreements the EU and Japan are currently negotiating could bridge the geographic distance between them with concrete economic and political results. And besides these improvements, economic agreement will also strengthen cooperation between Europe and Japan in a range of areas. This is a crucial issue also to enhance contacts between people of the two areas and, at the end, also among enterprises as regard connections and employment opportunity. Understanding the Japanese people represents one of the biggest obstacles for European SMEs wishing to enter the Japanese market. To overcome this and other similar issues, Eu and Japan have set up a range of instrument such as Industrial internship, the so called “Vulcanus” programme. “Vulcanus in Europe” offers EU based companies the possibility to host a Japanese trainee in R&D.  A valuable addition to their workforce and a positive input in the development of their business with Japan. “Vulcanus in Japan” is on the other hand a 1-year internship programme for European engineers and science-major students, managed by the EU-Japan Centre. Another example is represented by Fellowships for expert: “Minerva” is a 6-month in-house fellowship scheme in Japan, designed to support research and policy analysis of EU-Japan economic and industrial issues. The EU-Japan Centre for Industrial Cooperation proposes a 6 months in-house fellowship scheme in Japan, designed to support its research and policy analysis of EU-Japan economic and industrial issues. Furthermore, it could be highlighted EU-Japan Business Dialogue. The ‘EU-Japan Business Round Table’ fosters communication between the Japanese and European industries, and submits recommendations to the Japanese and European authorities. And another important development, on July 2019 the first meeting of the newly established Committee on cooperation in the field of agriculture between Japan and the EU was held in Tokyo.
In the end it could be said that the new partnership deal Epa should be seen in the light of growing protectionism in the world. The intensification of negotiations between the EU and Japan came in response to broader geopolitical developments such as the rise of China, Donald Trump policies in the US, and Brexit. Closer EU-Japan relations will not directly compensate for these developments but can substantially advance free trade and fundamental values worldwide.