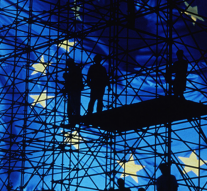 The European Commission in March 2016 presented a reform of the Posting of Workers Directive (Directive 96/71/EC), aimed at creating a “deeper and fairer European labour market”. To become law, the proposal will have now to obtain the approval of the EU Council and European Parliament.

The proposal envisages that workers posted from an EU country to work in another Member State should be entitled to the same pay as local employees, not just the host country’s minimum wage. The cost of an average hour of work ranges in the EU from 40.3 euro in Denmark to 8.4 in Poland, according to the latest Eurostat data. With the new rules, a Polish construction firm should pay much more than the average local wage in Poland to its employees who will have to work in another country like Denmark.
For this reason, it is easy to see that the proposal is likely to meet opposition from “low-wage” central and eastern European countries. On the other hand the Commission and some “high-wage” countries believe that the new directive would tackle social dumping, considered as an “unfair competition” from low-wage countries in the EU.

The aim of this proposal is to facilitate the posting of workers within a climate of fair competition and respect for the rights of workers, who are employed in one Member State and sent to work temporarily in another by their employer. The issue was raised after some Members required the Commission for an important revision of the Posted Workers Directive which in their views allows the circumventing of EU labour rules. The eastern European countries on the other hand mainly believe that emending the 1996 directive was not necessary to ensure fair competition in the single market: the Enforcement Directive dating from 2014 has not yet been fully implemented as the deadline for national transposition is 18 June 2016.

The revision will introduce changes in three main areas: remuneration of posted workers, rules on temporary agency workers, and the so-called long-term posting. Actually we have to highlight that posted workers are already subject to the same rules as host Member State employees in certain fields, such as health and safety. However, the employer is not obliged to pay a posted worker more than the minimum rate of pay set by the host country, leading to the fact that the posted workers are often paid less than other workers for the same job.

If the new Directive will be approved, remuneration will not only include the minimum rates of pay, but also other elements such as bonuses or allowances. Furthermore, rules set by law and applicable collective agreements in the Member States will become mandatory for posted workers in all economic sectors.
All this appears to go towards a more equal and democratic direction, but in the attempt to fight social dumping the European Commission could lead to the opposite of its original intention: indeed, it seems indisputable that there will always be wage differences because Member States differ in productivity, and cost of living and wage differences cannot be considered as an unfair competition or social dumping.
As regards potential issues, the current proposal could hinder new investments from “low-wage” countries, jeopardizing the free movement of labour and the functioning of the EU single market, that already registered a 45% increase in the number of posted workers between 2010 and 2014.