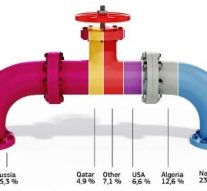 No Comments on The European energy sovereignty 60

The Russian aggression against Ukraine has reflected on the international arena on many different levels, triggering a severe crisis both at a humanitarian and energy level. In just two weeks, the conflict has rapidly escalated, and so far, the high-level talks of the international leaders and relevant ministers have not yet produced any ceasefire agreement.

Beyond a series of sanctions, the European Union has already put in place a series of measures to counter the consequences of the crisis. To help people fleeing the territories under attack, the Union is providing humanitarian aid and civil protection assistance to Ukraine and neighbouring Moldovia, Poland and Slovakia. As well, on March 8, concerning the energy implications of the Russian aggression, the Commission presented a Communication aimed at reducing EU’s use of gas supplied by Russia by the end of the year and at ending it by 2030.The EU imports 90% of its gas consumption, with 40% of the EU’s total gas consumption. Russia also accounts for 27% of oil imports and 46% of coal imports.

Following the Russian attack, notions such as European strategic autonomy and European sovereignty were once again in the spotlight. The Union has been forced to face its vulnerabilities where gas supplies are concerned. To counter such scenarios, fulfil its potential and be less vulnerable to external “actions”, it should become more independent and resilient. This is particularly true in the fields of security, and within the industrial, digital and economic domain.

For energy, and specifically gas consumption, the EU relies for 40% of its needs on Russia. Shared efforts towards a more sovereign Europe in the sector would entail numerous geopolitical and economic advantages. Not to mention that the steps towards this goal could contribute to achieving the bloc’s climate objectives set in the Fit for 55.

Starting last autumn, rising energy prices driven by the increased global demand for energy, prompted a widespread debate at EU level, leading the Commission to present a first Communication – the so-called Toolbox against the exceptional rise in global energy price – in October 2021. Since then prices have continued rising. The package, which included short and medium-term measures to protect consumers and businesses called for an integration. As well, recent events have fuelled the steady trend and urged the Commission to intervene by providing a European wide response to the issue – REpowerEU – A Joint European action for more affordable, secure and sustainable energy.

The REpowerEU plan proposes a dual track for phasing out EU’s dependence on Russian fossil fuels. It first calls for the diversification of gas supplies, involving increasing deliveries of Liquefied Natural Gas (LNG) from suppliers other than Russia – namely Egypt, the USA, Qatar – and diversifying pipeline sources. In addition, the EU should be opting for other energy sources (biomethane and hydrogen) and encouraging its citizens to save energy by reducing consumption, and where the concept of energy efficiency in private and public buildings is key. Indeed, the International Energy Agency (IEA) has estimated that reducing building heating systems by just 1°C would bring about a saving of about 10 billion cubic metres of gas within a year.

The plan also suggests to reduce dependence on fossil fuels by increasingly relying on renewables. Thus, energy diversification becomes key to energy supply and security. As well, the roll out of clean energy technologies such as solar power, heat pumps, onshore and offshore wind turbines becomes essential, with the ultimate goal of the outlined plan being to cut by two-thirds Russian gas supplies by the end of the year.

Annex I of the Communication also provides additional guidance on the application of Article 5 of the Electricity Directive which allows Member States to regulate prices in exceptional circumstances. Adding to this, the EU State Aid rules would also contribute to providing relief on extensive energy consumption for businesses and citizens. As far as the latter are concerned, the priority is to tackle the issue of energy poverty in the months and years to come.

Up to now, the EU’s full disruption of its gas supply from Russia has appeared to be unrealistic. However, the Commission has outlined a strategy aimed at pursing this goal in a relatively short amount of time (by 2030). Following up on this, in April, it is expected to present a legislative proposal on gas storage ensuring that existing storage infrastructures across Europe would be filled up to 90 % capacity by the beginning of October each year. This would allow the energy supply storage across the EU to be ready for winter, starting from the coming season. As well, the EU Executive is about to draw up a self-standing Temporary Crisis Framework to support companies severely affected by rising energy costs.

It should be recalled that due to the conflict and the related sanctions, the economic growth forecast for 2022 is expected to be lower than expected (less than 4%). Nevertheless, according to the Executive Vice-President for the European Green Deal, Timmermans, the EU needs to act swiftly in defence of its interests and in order to increase its resilience. The sole answer for this would come from renewable energy and energy supply diversification, which would allow for freedom of choice when deciding which energy source to rely on. Freedom, which would consequently bring about independence and strategic autonomy. In light of this, for the EU Commissioner, energy within the bloc should be clean, affordable, secure and sustainable and made in Europe.