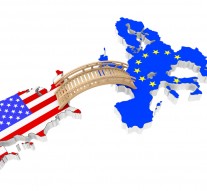 No Comments on Findings, issues and technical aspects of the TTIP 122

The Transatlantic Trade and Investment Partnership (TTIP)  is  highly controversial , but what is the real importance of the deal beyond the political debate?

The Transatlantic Trade and Investment Partnership (TTIP) between the US and EU is a highly controversial issue, jeopardising the political debate over the actual importance the deal. The last round of negotiations has been held in April – from 25th to 29th – in New York, while the next round has already been scheduled in July, in Brussels.

While negotiating in New York, a huge amount of issues arose during trade talks, especially on those sticky points concerning the horizontal cooperation on technical regulation especially on agricultural products and common European standards on food security and consumer protection. The underlying consensus and political support to the Transatlantic Partnership has deeply changed over time. Especially in Europe, where citizens have decided to take the street to demonstrate their fear and rage against a deal that would likely undermine European social, food and environmental standards.

This political sensitivity has been well voiced through the latest resolutions by the European Parliament, which is actually different from previous resolution voted in 2012 and 2013. Then, at the very beginning of the negotiations process between the US and the EU, there was much more confidence in the positive impact of TTIP on both political and economic sides of the transatlantic relationship. Also the negotiating objectives defined by the Council of the EU were slightly different and definitely more ambitious.

TTIP is more than a commercial treaty

If considered in its commercial dimension only, clamour for TTIP would not be properly justified. From the simple trading point of view, TTIP would be just the third biggest Free Trade Area (FTA) ever built. Yet, there is much more inside TTIP than in every other traditional free trade agreement. Next to the simplification and lowering traditional tariffs and barriers to trade, TTIP would build up a regulatory bridge between both shores of the Atlantic Ocean. This regulatory aspect would recover with new inputs the latest failed efforts to shape the international trade agenda, and foster the leadership of the “western block” – using a Cold War definition – over a multipolar distribution of international trade power. Combining trade, investments, common regulatory standards and efforts and standardised procedures concerning public procurements, TTIP is the widest and richest trade agreement ever negotiated.

Generally considered as an “isolated” policy by experts and academics, far from any sort of democratic participation or lobbies’ influence, the European Common Trade Policy is actually based on a diffused network of horizontal relations, more or less institutionalised, among actors characterised by different natures, origins, objectives and strategies. Consequently, a profound change can be observed in those typical aspects related to the Common Trade Policy in the new political context surrounding the negotiating process of TTIP.

In facts, it can be said that Common Trade Policy is even more “common”, meaning that the debate over trade policy issues became, with TTIP, even more democratic and open to different voices coming from different actors. Consensus has quickly changed over time, and the political support to TTIP has radically mutated in its evolution from 2013. Germany, Austria, Greece, France, Spain and Portugal are just few examples of Member States whose political debate over TTIP has been based on the coexistence of a huge and well-organised movement against the deal, and the formal public institutions, trying to overcome the wave of growing European anti-TTIP movements. Public authorities and institutions seem to have realised belatedly the impact and the potential of those groups and organisations that are after all trying to put in place joint promoting actions and communications activities against the opportunity to ratify a comprehensive deal with the United States.

The role of the EU Commission as negotiator

The EU Commission is the main negotiator of the agreement for the European Union. Its negotiating capacity is actually bounded by strict negotiating directives defined by the Council of the EU, which has the power to say the last word over the entire deal, once the agreement has been found, voting with unanimity or qualified majority – depending on the issues discussed at the negotiating table.

Those negotiating directives build up a strong framework defining the room for manoeuvre of the European Commission, with some exceptions like the “cultural” one – preserving cultural and linguistic diversity in Europe against every cause of injury resulting from harmful regulation. The Commission and the Council of the EU are legally bound to inform the European Parliament about every step of the negotiating process. Once the Treaty of Lisbon entered into force, important tasks and competencies in trade have been delegated  to the European Parliament, turning the decisional context to the Parliament’s side. Furthermore, the European Parliament has the right to ratify with simple majority those international trade agreements negotiated by the Commission.

Although we briefly presented the typical decision-making process of the European Common Trade policy, another point is missing. TTIP deals with different aspects of economy and industry related to trade, but not explicitly falling into the exclusive competence of the EU. Therefore, if an ambitious and comprehensive agreement will be found, as  different level of EU competencies are linked to the issues inside the TTIP, the ratification process would not only include the European Parliament itself, but also all legislative assemblies of each Member State. This new aspect will likely constitute an important step towards the expansion of the international trade agenda, while, on the other hand, would probably determine one of the main challenges for TTIP, namely passing the vote in every Member State.

Domestic political spins and pirouettes inevitably will have an impact on TTIP negotiations procedure. One over the others is the “Brexit vote” held the 23rd of June. From a geopolitical point of view, as we mentioned in a previous article, it will be definitely interesting to assist what impact Brexit will exert on TTIP, once that President Obama had already confirmed that in such a case, UK will not be considered within the competence of TTIP and no other trade instrument will be recovered in order to foster an even weaker “special relationship” between UK and the United States.