Home / Migration / Food and migrations in wake of Ukrainian war 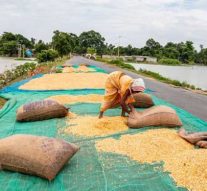 This article tackles the food security and migratory movements in wake of the war in Ukraine. According to the United Nations High Commissioner for Refugees, about seven million people have left Ukraine since the conflict started on February 24. According to the research, 3.6 million people—more than half—found asylum in Poland, 989,000 traveled to Romania, and 971,000 went to Russia. Moldova, Slovakia, Belarus, and Hungary each took in 683,000, 480,000, and 461,000 refugees respectively. Some refugees have returned to their homes, where there are no longer any hostilities, while others have returned to Ukraine, but not to the area where they previously lived. The data for the ongoing conflict in Ukraine are as of right now. Some of the worst food insecurity in the past 70 years has been brought on by the crisis.

The scarcity of food is a hindrance to these problems. Egypt, which imports the majority of its grain from Russia and Ukraine, as well as Peru, where the impact of the war on food shortages and higher fuel prices caused a political crisis, or Lebanon, where the price of sunflower oil increased by 83 percent during the first month of the Ukrainian conflict and the price of the average consumer basket was three times higher than at the same time in 2020, according to the “Washington Post,” are among the nations that have been hardest hit. Large numbers of immigrants continue to flee the areas affected by the war in the majority of these nations. An older (2015) route from the Middle East to Western Europe via Hungary and the Balkans is once again active, parallel to the contemporary crises. All of these migratory patterns and the stability of the food supply have some very significant connections. According to the graph below, Russia and Ukraine account for a sizable portion of the world’s food markets, and their intrastate conflict worsens the supply situation worldwide.

Filippo Grandi, the head of UNHCR, issued a warning in June that the number of displaced persons worldwide will rise well over the record 100 million currently estimated unless the rising food crisis brought on by Russia was swiftly remedied. One of the largest grain exporters in the world is Ukraine.

However, the invasion by Russia has significantly hampered that production and dispatch. The Black Sea ports of Ukraine are currently prohibited from receiving almost 20 million tons of grain from the previous harvest. Prices for some goods and cooking oils have skyrocketed on international markets as a result of the crisis, with the Middle East and parts of Africa taking the most hit. The lack of food and rising energy prices, according to EU Home Affairs Commissioner Ylva Johansson, pose security dangers.

With increased intake of nutrient-poor, energy-dense foods, migrant populations’ nutritional security is put at risk. Millions of migrant workers in other states began moving for their homes, no matter how far away, in order to give their family a chance at security. Many chose to walk or pedal hundreds of kilometers to go home because there were no available transportation options.