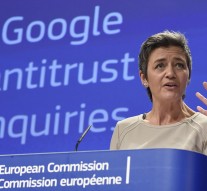 The European Commission has come to the conclusion that Google has breached EU antitrust laws and fined it around 3 billion Euros for the coming weeks, British newspaper The Sunday Telegraph reported.

On 20 April, Google received a Statement of Objections from the European Commission, which accused Google of promoting its shopping service in Internet searches at the expense of rival services by its practices as regards its mobile operating system Android.

It is a case that has dragged on since late 2010. After three failed attempts at a compromise in the past six years, several people familiar with the matter told Reuters last month, Google now has no strategy to try to settle the allegations unless the EU watchdog changed its stance.

According to the Commission, Google has imposed unjustified restrictions and conditions on manufacturers of devices running its Android mobile operating system as well as on mobile network operators.

“We have found evidence that as a result, device manufacturers and mobile network operators have refrained from pre-installing alternative search services,” Commissioner Vestager added.

The Commission also accuses Google of preventing manufacturers who wish to pre-install Google apps on even one of their devices from using modified, competing versions of Android on any of their other devices.

Google’s Practices Are Neither Open Nor Fair, EU Commission said

Android is an open-source system and anyone can use and develop it freely. While the open source model is no cause for concern, the EU Commission said, some Google’s business practices regarding Android and mobile search are neither open nor fair.

For example, Smartphone and tablet manufacturers are not able to choose which search engines and which browsers to install on their devices, as Google obliges them to pre-install and to set its own as the default search provider on those devices.

As a result, some manufacturers have decided to make use of Google’s products, rather than choosing an alternative version of Android developed by a credible competitor.

Furthermore, financial incentives to manufacturers and mobile network operators are provided by Google on condition that its search engine is pre-installed as the exclusive search provider on those devices.

The Commission said that Google‘s behaviour has violated EU antitrust rules and has harmed consumers by stifling competition and restricting innovation also in the wider mobile space.

As a result, the British newspaper wrote, Google will be forbidden to continue manipulating search results to favour itself and harm rivals. It will also pay a record antitrust fine around 3 billion Euros in the coming weeks.

Officials planned to declare the fine as early as next month, sources cited by The Telegraph as close to the situation said, but the bill had not yet been finalised.

Under EU competition law, firms can be fined up to 10 percent of their annual sales. In Google’s case, this could reach a maximum possible sanction up to more than 6 billion Euros. The biggest antitrust fine so far was a 1.1 billion-euro sanction imposed on chip-maker Intel (INTC.O) in 2009.