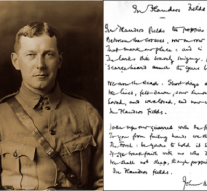 John McCrae inspired the poppy tradition to remember WWI with his poem In Flanders Field, whose final lines read:

If ye break faith with us who die

We shall not sleep, though poppies grow

100 years after World War I it is hard to say who is breaking the faith of those who died. Is it the nationalistic wave, especially in countries on which the war had such a decisive impact – Czech Republic and Slovakia, Poland and, of course, Austria and Germany – or is it the failure of the pro-European parties to thrive trust and visions of the European citizens?

The Flanders Fields remember us of the trenches and how equal working class members with a different passport but actually the same issues ended up shooting each other under orders from their imperialist and nationalist governments. Today, nationalism and populism are fuelling exactly the same heinous and explosive dynamics.

A hundred years after WWI, the Future of Europe process is stuck. The Brexit deal is still on hold. Pro-European parties and actors in society are cornered and don’t have a strategy on how to get out of the corner and win again citizens’ trust. How to deliver again a vision based upon hope and stop the fear-fuelled nationalistic and populistic wave?

A hundred years later, WWI can change its shape according to nowadays technologies. It may appear in a different form from rifles and trenches. But trenches are not necessarily physical and separating and turning  the working class members against each other is easier when the new technologies create production models and organise the work in such a way that fragments workers and prevent them from unionising.

A hundred years later, bright red poppies can inspire much more than remembrance. They should inspire a vigorous reaction to the hundred modern trenches that let Brexit happen, let nationalists take over governments, let populists fuelling despair over visions.

May the poppies inspire a new course, set on hope and trust, for the Future of Europe.