Home / Employment and Social Affairs / The legacy of the war: Ukraine is Europe 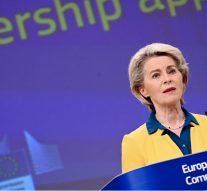 No Comments on The legacy of the war: Ukraine is Europe 19

If there is one thing that is clear after almost four months of war, is that Ukraine belongs to Europe and its integration process in the EU has registered many progress during those difficult times.

“We recommend to give Ukraine the candidate status, on the understanding that the country will carry out a number of important reforms”, declared the EU Commission President, Ursula von der Leyen, during a press conference on 17th of June. “Ukraine has clearly shown commitment to live up to European values and standards. And embarked, before the war, on its way towards the EU”, she added.

Thus the EU Commission recommended that Ukraine becomes a membership candidate to join the Union, albeit on the understanding that the war ravaged country carries out a series of important reforms. The opinion from the Commission comes ahead of high-level discussions in Brussels about Ukraine’s potential membership. “We all know that Ukrainians are ready to die for the European perspective. We want them to live with us the European dream”, said Von der Leyen. Ukraine’s President Volodymyr Zelensky welcomed the EU’s proposal to grant candidacy status to Ukraine and said it would help Kyiv to defeat Russia. “It’s the 1st step on the EU membership path that’ll certainly bring our Victory closer”, said Zelensky talking about an “historic decision”. Also Moldova has received EU candidate status, a first step in the long process of accession.

This important development came after the second trip in Kyiv of the EU Commission president on 11th of June and the day after a joint mission in Ukraine carried out by German Chancellor Olaf Scholz, French President Emmanuel Macron and Italian Prime Minister Mario Draghi. “Ukraine belongs to the European family,” Scholz argued after meeting Zelensky. “I want to say today that the most important message of my visit is that Italy wants Ukraine in the European Union. And it wants Ukraine to have candidate status and will support this position at the next European Council,” said Draghi during a joint conference in Kyiv with the other European leaders. In a visit to Irpin, one of the suburbs of Kyiv devastated at the start of the war, the French president defended himself against any “ambiguity” in his support for Ukraine, having been heavily criticised for saying that Russia should not be “humiliated”. Macron argued Ukraine must be able to resist and prevail against the Russian army. “France has been at Ukraine’s side since day one. We stand by the Ukrainians without ambiguity,” he said.

Never before has a recommendation been given so quickly on EU candidacy. And the fast track in EU integration process for Ukraine has sparked some criticism. The same chancellor Scholz recognized that “for the sake of credibility” the EU should move forward integration of the Countries of the Balkans. EU enlargement is in any case a long process and this key policy has indeed stalled since 2018. EU member states cannot agree on whether to bring other official candidates: Albania, North Macedonia, Montenegro, Serbia, many of these country at the hearth of Europe has received the status of candidate since more than 10 years but the situation is in stalemate.