Home / Migration / The logistics of covid-19 vaccination for refugees 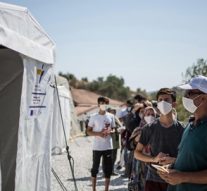 Refugees in the European Union should have equal access to promising COVID-19 vaccines, the head of the United Nations migration agency told the European Parliament at the end of November. “It is for the sake of their safety and wellbeing of the entire host communities” in the countries taking them in, said Antonio Vitorino, director general of the International Organization for Migration (IOM). The European Union has started a mass vaccination against the coronavirus in Member States, which have so far recorded more than 335 thousand deaths related to Covid-19.

Al Jazeera reported that he was one of several high-profile speakers dialling in for a virtual conference organised by the European Parliament and Germany on migration and asylum in Europe. Announcements in recent days that coronavirus vaccines developed by German and US companies appear to be highly effective prompted Vitorino to plead for them to be given to migrants also, when Europe starts giving jabs to its population.

Furthermore, Vitorino also urged the EU to push ahead with a reform of its asylum and migration policy put forward by the European Commission. The Covid-19 pandemic is creating “extra pressures” driving migratory flows, he said, noting that “the Sahel is exploding”, with consequences for all West Africa. Libya, a restive transit country for many refugees and migrants seeking to get from Africa to Europe by perilous boat journeys in the Mediterranean, “is not a safe port of disembarkation”, Vitorino said.

What are the EU’s responses for the migrants in terms of vaccination and Covid-19 response? The EU Regional Trust Fund in Response to the Syrian crisis (EUTF Syria) and the EU Emergency Trust Fund for Africa – North Africa window (EUTF Africa) play a vital role in providing assistance in neighbouring countries to vulnerable local communities as well as refugees or migrants. EU Commission announced on its website, that the EU support provides emergency medical assistance, distribution of hygiene kits, support to basic health services and infrastructures, social protection and support to victims of sexual and gender-based violence.

Moreover, the EUTF Syria has redirected activities within ongoing programmes worth €91.5 million in the health and Water, Sanitation and Hygiene sectors, and adopted an additional €55 million package for refugees from Syria and vulnerable persons in Jordan and Lebanon to fight the pandemic. This package includes additional emergency health services such as medical assistance of isolation centres and mental health support, essential water, sanitation and hygiene services, and access to health and social protection services for Palestine refugees from Syria, Jordan and Lebanon.

The EU pays special attention to the occurrences related to refugees in Turkey. The situation of the most vulnerable members in Turkish society, including refugees, is an issue of special concern for the EU support to Covid-19-response in Turkey. Turkey hosts the largest number of refugees and migrants in the world (4 million people) and the EU has a special responsibility under the EU-Turkey Statement of March 2016. Under the Facility for Refugees, some €58 million are being mobilised to respond to Covid-19 related needs among refugees and the most vulnerable members of Turkish society. In addition to the €6 billion already mobilised under the Facility for Refugees, €485 million have been earmarked as humanitarian support in Turkey. These funds ensure the continuation of two EU flagship humanitarian projects until the end of 2021. This funding comes on top of the Facility for Refugees in Turkey, which has already been committed in full. The portal Info Immigrants announced that asylum seekers and staff of asylum seeker facilities, as well as homeless shelters, are in category two for vaccination in Germany. The second group also includes people from the age of 70 and those with an extremely high or high risk from Covid-19.

The Guardian wrote about UN Secretary General, António Guterres, who has pleaded for the vaccines being rolled out across the globe to be made available to “all people” and that their distribution must be viewed as a “global public good”. His comments followed mounting concerns that a scheme to deliver Covid-19 vaccines to poorer countries faces a high risk of failure and could leave at least half the planet without vaccinations for at least the next three years. The World Health Organization (WHO) is administering the roll-out to poorer nations and said it aims to have 2 billion people vaccinated by the end of 2021. However, the target has been described by senior UN officials as ambitious and unlikely to be met without a serious upscaling of resources and political mobilisation.