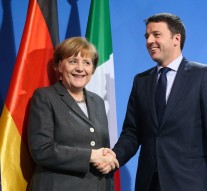 No Comments on New alliance between Italy and Germany 116

Amid the economic crisis and the success of extreme right parties across Europe, Italy has become new Germany’s ally.

Greece has been the Guinea pig that experienced the well-known policies of austerity. However, it turns out a failure because, despite the cuts in public expenditure, wages and pensions, the Greek debt ratio keeps growing.

The explanation is quite simple: the expenditure cuts already mentioned cause a new fall of gross domestic product, new business bankruptcies, new unemployment. A fall of GDP leads to an increase in the debt ratio. As a consequence, it becomes more difficult to place Government bonds on the market; investors are not confident and demand higher interest rates. Then total government debt also increases accordingly in an endless spiral.

Despite the austerity cure is not working, Germany is unwilling to accept corrections to its economic policy. Economic growth is not financed with debt, but rather with well-ordered accounts. Since expansionary monetary policy cause inflation in the long term, Germany fears them as a conditioned reflex. Indeed, the Weimar Republic fell because of an impressive growth of inflation.

Germany has an unconscious fear of the Weimar Republic fall; yet it is unable to perceive the sensational increase of xenophobic and racist far-right parties across Europe.

Austria is just the latest case of this phenomenon. Despite the outcome of the elections, it was a victory for the right-wing party Fpö (Freiheitliche Partei Österreichs – Freedom Party of Austria), thanks to the support of half country’s population.

While Austria has Fpö, France has the Front national, Greece Golden Dawn, Italy the Northern League and the whole collection of para-fascist parties. Even Germany has Alternative für Deutschland (AfD), which is not openly a neo-Nazi party, but still gets votes from neo-Nazis.

What triggered the fearsome rise of far-right parties? The mortal combination of economic crisis and migration flows from North Africa and the Middle East.

Besides the rising of the far-right parties, there are also the risk of Britain’s exit from the European Union and the autarkic policies of Eastern European countries, formerly satellites of the Soviet Union.

Germany seems not to worry too much about the increasing influence of the far right parties in Europe, but it feels more and more politically isolated. Therefore it tries to remedy this by finding an unexpected ally in Renzi’s Italy. Why?

In the past, France was the country favoured by Germany, but Hollande’s France is in crisis at the moment. It is unable to comply with the 3% deficit ceiling, despite the 50 billion of public spending cuts announced for the period 2015-2017. What is the cure proposed for such problem? The usual, more cuts, together with the reform of labour market. But the French Government is in trouble with its jobs act, which is causing unrest in the country. And Holland is unlikely to be reappointed as head of the Elysée in 2017.

Spain and Portugal are in difficulty too.

Spanish national debt is more than 100%, despite the policies of austerity. The aim of correction of the deficit is a mirage. The European Commission calls for new cuts, but has not pursued the infringement procedure because Spain is about to held elections in June and Rajoy should not be weakened. Therefore the Commission has put the procedure back in July.

In order to achieve the objectives set, the European Commission seeks new deficit cuts of 750 million also for Portugal. Otherwise, the infringement procedures for excessive deficits will begin.

The crisis in Greece seems to be endless. Alexis Tsipras’s Government managed to push through Parliament new austerity measures: new increases in VAT, privatization, block of wages for some categories of State employees and the well-known automatic cuts in spending in the event that the budgetary targets are not met.

All these efforts are just to get 86 billion in aid, which will not be used to finance any economic growth but to rather increase the national debt. The International Monetary Fund knows that Greece will fail to pay its debts and asks for a restructuring, but Germany does not listen to reason. This is a dangerous game; Government majority of Tsipras might not hold up without a debt reduction in the long term, while Greece’s welfare State is asked more and more to cut its expenditures. Next polls could deliver victory to the neo-Nazis of the Golden Dawn and the risk of an exit from the euro.

Read “The Greek Economy in Deb(T)location”  and “Can Greece Reforms Lead the Way Out of the Vicious Cycle?” for more information on the last reforms in Greece.

Britain, whose presence in the EU is at stake, observes all this from far and fears Germany and the risk of being crushed by its former enemy through euro, Germany’s new panzer.

The economic crisis has been causing the European Union distress since 2008. The EU economic policy is the one imposed by Germany, namely a strict observance of the Maastricht criteria coupled with austerity policies. But this formula does not get the desired outcome: austerity reduces the GDP, increase the debt ratio and the need to issue new debt. So the deficit increases, and so does the risks of infringement procedures. Therefore, governments led by Christian Democrat and/or Socialist get more and more unpopular and new political subjects are getting their way. Populist, xenophobic and racist parties are obtaining more and more support among EU citizens. They thrive on fear of immigrants, whose arrival is undermining social policies in favour of the Union poorest, who are moving increasingly to the right.

This is the common destiny shared by France, Spain, Portugal, Greece and Austria.

Italy also is under the commission observation and risk an infringement procedure. Though, Renzi’s Government has managed to achieve the labour market reform and it is proceeding with the constitutional reforms and bank system restructuring. Right now, it seems to be the most reliable country for Germany. For this reason, the examination of deficit objectives was put back to the submission of the stability law in 2017.