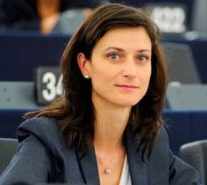 The first news is that finally the EU Commission would conclude the long-awaited replacement for former Digital Commissioner Günther Oettinger. Bulgaria has finally chosen to nominate MEP Mariya Gabriel to replace Kristalina Georgieva on the European Commission. Gabriel would work for Digital Vice President Andrus Ansip, who has been handling the digital portfolio since Oettinger left the post in January to replace Bulgarian Georgieva who left the position going to the World Bank.
This appointment would be very important, furthermore in a decisive period for EU digital policy. Having reached the middle of its mandate, the European Commission published on 10th of May the mid-term review of its Digital Single Market strategy.  The focus is now on obtaining political agreement with the European Parliament and the Council on all proposals, like the updated EU telecoms rules which will boost investments in high-speed and quality networks.
The Commission has identified three main areas where further EU action is needed:  to develop the European Data Economy to its full potential, to protect Europe’s assets by tackling cybersecurity challenges, and to promote the online platforms as responsible players of a fair internet ecosystem. “We need cyber-secure infrastructure across all parts of the EU so that everyone – everywhere – can enjoy high-speed connectivity safely”, commented Andrus Ansip, Vice-President for the Digital Single Market.
The core objective, as stressed by the same vice-president Ansip  during the celebrations of the 60 years of the Treaties of Rome, is that “for over 60 years, European countries have worked together to capture the economic benefits of larger, better integrated markets, and made sure those benefits flowed to people. The same has to apply to the digital environment”.
In March Rome hosted Digital Day with the aim to boosting cooperation between EU Member States to better prepare our society and industry to reap the full benefits of the digital transformation. Representatives of EU member countries signed a ministerial declaration to establish Europe as a global player in high-performance computing (HPC); a  large number of European countries has signed a letter of intent to establish, together with the Commission, a legal framework for cross-border trials in connected driving, based on harmonised rules on data access, liability and connectivity; a pilot project has been launched to address the fact that – despite high levels of youth unemployment –  there are two million job vacancies in Europe. In many countries there is a mismatch between the skills of the job seeker and the needs of the labour market. The aim of this pilot project is to launch “cross-border work experiences” based on existing EU programmes and networks such as the Digital Skills and Jobs Coalition for up to 6,000 graduate students in 2018-2020; finally the Commission has presented an updated European Interoperability Framework for digital public services.
But cooperation and coordination between member countries in crucial to implement a digital single market and to boost employment related opportunities in this sector. Even 2017 Digital Economy and Society Index (Desi) highlights that the gap between top digital players and lower-performing countries is still wide. Denmark, Finland, Sweden and the Netherlands lead the 2017 Desi, followed by Luxembourg, Belgium, the UK, Ireland, Estonia, and Austria. On the other hand – if Slovakia and Slovenia are the EU countries which have progressed the most -, despite some improvements, several member states including Poland, Croatia, Italy, Greece, Bulgaria and Romania, are still lagging behind in their digital development compared to the EU average. That’s why the EU should work and invest more to close the gap in order to boost digital growth in all the EU countries.
As stressed several times the Digital Single Market is a Juncker Commission’s top priority because a functional Digital Single Market could contribute €415 billion per year to our economy and create hundreds of thousands of new jobs. In two years the EU has already achieved important agreements, namely the one on the end of roaming charges on 15 June 2017 for all travellers in the EU. Now the work is up to the European Parliament and the Council to make the other proposal reality for the EU citizens. And having a new Digital Commissioner is an element that would further strengthen the EU action in this crucial period for implementing an effective single digital market.