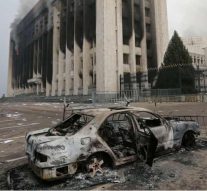 Kazakhstan is not used to reach front pages of international media due to protests and citizens movements. Something is slowly changing in the Central Asia Country once ruled by Nursultan Nazarbayev: year 2022 has started with unexpected attention by international news following massive unrests that resulted in at least 44 deaths and in thousands of detentions. On January 5th Kazakh President, Kassym-Jomart Tokayev, imposed a state of emergency and he ordered police to shoot to kill “terrorists” who participated in the protests.

Protests started on 2 January in the western province of Mangistau after a decision to liberalise the prices of liquefied petroleum gas, a popular car fuel in Kazakhstan. Many Kazakhs converted their cars to use LPG because it was cheaper than other fuel. However, the government said the price cap was leading to LPG shortages and it could no longer afford to boost supplies. Its decision to remove the cap virtually doubled the price.

Kazakhs who drive cars protested and many people joined them. This very rapidly became a social and political protest movement that quickly spread across all major cities within days. And they were soon reportedly hijacked by criminal groups who attacked law enforcement officers and set government buildings on fire. In this situation President Tokayev called on members of the Russia-led Collective Security Treaty Organization to deploy peacekeeping troops to quit the violence following the domestic uprisings, citing an infiltration of foreign-trained terrorist groups. After the Collective Security Treaty Organization’s intervention, the situation seems to be returned to normality in Kazakhstan.

Unlike protests in Belarus, Ukraine, and the Middle East – the so-called colour revolutions – Kazakhstan showed a complex network of different forms of mobilization depending on location, the community’s history of previous protests, and the types of demands made. In any case, there is no single leader or dominant political group guiding the protest, and not even an elaborate political agenda. Despite western Kazakhstan being rich in oil and gas, it is acknowledged that quality of life there is generally inferior to the capital, Nur-Sultan, and the business capital, Almaty. Thus, the unrest seems to be related mostly to poor conditions of local populations fuelled by the soaring of energy prices.

Furthermore, Kazakhstan is the second largest bitcoin mining nation in the world and the protests highlight the importance of this role, as for some days Kazakh authority has cut off internet access. Bitcoin relies on a network of computers known as miners that solve mathematical problems to secure the currency, consuming vast amounts of electricity in the process. China was once the global powerhouse of bitcoin mining, but government restrictions in May last year caused the entire industry to relocate and seek friendlier states with cheap energy. Thus, Kazakhstan passed from 1.4 per cent market share in September 2019, to 18,1 per cent in august 2021.