Home / Migration / Ukrainian migrants in the US asylum system 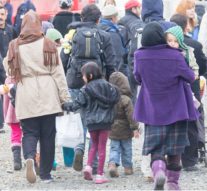 No Comments on Ukrainian migrants in the US asylum system 28

The US asylum procedure for Ukrainian refugees escaping Russia’s invasion will be sped up thanks to a new program launched by President Joe Biden. As long as they can provide for them financially, American citizens and charitable organizations may sponsor Ukrainian refugees under the “Unite for Ukraine” initiative. Biden stated at the White House that the program would be quick, efficient, and ensure that the United States kept its promise to the Ukrainian people and that they wouldn’t have to cross our southern border. As part of a larger package of assistance programs for Ukrainians as they repel a savage Russian attack, Biden revealed the new refugee sponsorship scheme.

He also disclosed direct government assistance and new military equipment around $1.3 billion. According to an information sheet from the Department of Homeland Security, the “Uniting for Ukraine” program would be centered on an online platform where Americans can apply to become sponsors and upload documentation. Ukrainians have to be residing in their native nation as of February 11 in order to be qualified for the expedited procedure. Before being admitted, they must also go through biometric screening, immunizations, and background checks. Biden promised that the United States would take in up to 100,000 Ukrainian refugees in March. But up until today, there had been no detailed explanation of the procedure.

According to government data obtained by CBS News, the US  took in more than 100,000 Ukrainians in the roughly five months after Russia invaded Ukraine, delivering on President Biden’s promise to offer a temporary safe haven to those displaced as part of the largest refugee exodus since World War II.According to government statistics, the tens of thousands of Ukrainians who have entered the United States since the invasion on February 24 have done so via various immigration processes and with varying legal standing, the majority of whom have been granted temporary entry visas.

According to the CBS data, over 22,000 Ukrainians were admitted along the USA-Mexico border, over 47,000 Ukrainians arrived in the US on temporary or immigrant visas, 500 Ukrainians entered through the traditional refugee system, and close to 30,000 Ukrainians arrived through a private sponsorship program. In order to take a tough position against Russia’s on-going invasion of Ukraine, Mr. Biden announced in late March that he would accept 100,000 of the millions of Ukrainians who have fled to other areas of Europe. At the time, the White House announced that various immigration schemes will be used to bring Ukrainians to the United States.

The United States has done such things before. The president has stated that the United States government will accept 125,000 refugees from all over the world this fiscal year, a significant increase after the Trump administration pushed the program to record lows, according to the Washington Post. The Biden administration has also pledged to establish a more humane immigration system. Following the Taliban takeover of the nation, the Biden administration also welcomed 76,000 Afghan allies, most of whom were granted humanitarian parole.

Immigrant and refugee rights activists applauded the quick process but expressed certain worries. They expressed the hope that the Biden administration would expand it to include other nations suffering danger, such as Afghans who have not yet been granted entry to the country, and quicken the processing of all refugee claims.