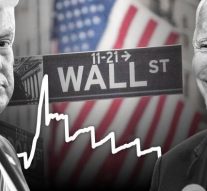 No Comments on US stock market boomed after the presidential election – Could EU economy profit? 28

According to the incumbent President of the USA, Mr. Donald Trump has not still recognized validity and results of the elections held on November 3. The disputed electoral results have also been blocked by the media and online media as well such as Twitter and Facebook.  However, Mr. Joe Biden will be the next president of the United States, and life goes on. As a reaction to this outcome, US stock market boomed, which resulted with the rise of shares’ worth on the market. Are there any influences for the EU economy? This analysis will briefly present it.

Before the U.S. elections, not so many analyses of economic forecasts have been cast in the media. One of the rare, has been published by the CNBC. It casts an assumption that the U.S. politics are a “serious risk” to Europe’s economy. Their interviewee has warned in the middle of October (only two weeks ahead of the elections) that a contested election outcome could lead to “serious uncertainty and significant street protests” in the U.S. by supporters of the losing side, and also will influence EU economy.

Another issue CNBC analysis puts in stake – is trade. If Trump is re-elected there are fears he could start a trade war with Europe, as he has previously threatened to do, claiming last year that Europe has “in many ways” treated the U.S. “worse” than China. A trade war would be damaging to both the European and U.S. economies, CNBC analysis claims, though the EU stands to lose more if tariffs are imposed on its exports to the States. Moreover, this analysis casts that the EU had a 153 billion euro ($180.3 billion) surplus with the U.S. (meaning it exports more to the U.S. than it imports) in 2019, according to data from Eurostat.

EU exports to the U.S. in 2019 were worth around 384 billion euros, whereas U.S. imports to the EU were worth around 232 billion euros. In addition to the trade of goods and services, “some U.S. tech giants made a significant share of their global profits on the EU market. In short, U.S.-EU relations matter a lot for both sides,” CNBC’s interviewee noted. He said that the EU is “the only region which, in mercantilistic terms, could strike back at the U.S. almost like-for-like in a genuine trade war,” and this might prevent the U.S., if Trump were re-elected, from embarking on one.

Shares of several European companies were active after results of the U.S. elections were announced. Allianz ALV, 0.39% stock rose 1% after the German insurer reported higher third-quarter net profit. The company said it would discontinue a previously suspended 2020 share buyback program due to economic uncertainties sparked by the coronavirus pandemic. Auto stocks weighed on the downside, while miners were supporting the larger Europe index. Shares of Daimler DAI, 0.25% dropped 2% and those for Volkswagen VOW, 0.89% fell 1.3%. Shares of miner Anglo American AAL, -0.05% rose 2.2%, as web portal Market Watch reports.

It seems that the biggest challenge for the transatlantic relations is related to the “market war” between air industry European manufacturer “Airbus” and its American counterpart “Boeing”.

“ThinkING” analysis claims that when observing about what has recently defined the relationship between the EU and the US, two things immediately come to mind: tariffs and sanctions. The “America First” policy, applied by President Trump in order to tackle the US current account deficit, has challenged many economies over the last four years. Before Trump moved into the White House, the US had been a reliable partner in trade and foreign policy. This included, among others, fighting terrorism and cooperation in safety and energy.

It is not clear whether the EU will deeply cooperate with the US after the Trump’s administration leaves the White House. What we now may conclude as preliminary outcome is that election of Mr. Joe Biden brings stability to the relations with the European Union and its individual Member States. It is sure that once Trump’s era is over, there won’t be such trade wars between the two trans-Atlantic traditional partners.