Home / Energy / What seed did G7 leaders sow of Energy and Climate Future? 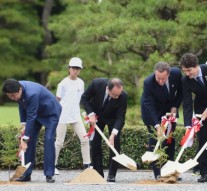 No Comments on What seed did G7 leaders sow of Energy and Climate Future? 29

During this year’s G7 summit, held in Ise-Shima, Japan, leaders from Canada, France, Germany, Italy, Japan, the United Kingdom and the United States and the European Union welcomed the historic climate agreement in Paris and made a strong call for the swift and successful implementation of the agreement.

Held on 26-27 May 2016, the G7 Summit focused on world economy and trade, foreign policy and climate change and energy.

As for Energy and Climate Change, G7 leaders discussed how to lead the efforts of the international community, building on the outcome of the climate change Conference of the Parties (COP21) in Paris, in December last year.

They also addressed energy policy issues, against the background of decreasing energy security.

What did the G7 discuss as for Energy and Climate?

While welcoming the historic climate agreement in Paris, the G7 group “commits to taking the necessary steps to secure ratification, acceptance or approval of the Paris Agreement as soon as possible, and calls on all Parties to do so striving for a goal of entry into force in 2016.”

The G7 countries also decided to take the lead in this and pledged to provide, as well as mobilise, increased climate finance from both public and private sources.

“We commit to take the lead by early, transparent and robust implementation of our nationally determined contributions, and promoting increased ambition over time. We also commit to actively participate in the regular review of global stock-take progress every five years. We commit to formulate and communicate ambitions mid-century long-term low greenhouse gas (GHG) emission development strategies well ahead of the 2020 deadline,” state the joint-press realeased by the G7 Leaders.

In this context, they also underlined the importance of transferring appropriate technology and capacity-building support to the most vulnerable developing countries.

For more information on the Climate agreement in Paris, read “Cop 21: last call for the Earth” and “What do we know about the Paris Agreement? Let’s make the point together.”

In light of the important role played by energy system in the implementation of the Paris Agreement, leaders also discussed the need to facilitate energy investments and enhance the functioning of natural gas markets through greater transparency and flexibility.

“We are determined to accelerate our work towards the transition to an energy system that enables a decarbonisation of the global economy, and commit to further invest in supporting innovation in energy technologies and encouraging clean energy and energy efficiency, so as to ensure economic growth with reduced GHG emissions,” adds the joint-communiqué.

While increased uncertainty is posed by the current energy price levels, they also committed to play a leading role in facilitating energy investments, in particular investments in quality energy infrastructure and upstream development.

What is the EU role in all this?

The European Union is now looking forward to the ratification of the Agreement and its fast entry into force.

As a follow up to the Paris Agreement, it is a priority for the EU to implement the 2030 energy and climate framework as agreed by the European Council.

Read “The Year For EU to Change Climate Change”  and “Towards an Energy Union” for more information on the European Union as for Energy and Climate Change.

First major economy to table its commitment in the run up to the Paris climate conference COP21, the EU has the world’s most ambitious commitments on climate change, namely a reduction target of at least 40% in greenhouse gas (GHG) emissions by 2030 compared to 1990; to at least 27% of total energy consumption from renewable energy; and to at least 27% increase in energy efficiency.

Before being one of the priority policy areas of the Juncker Commission, climate action has been part of the political and legislative EU agenda for many years. It is also an integral part of the 2030 European Energy Union strategy.