Home / Economy / What’s in stake with the EU Economic Semester? 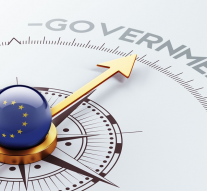 No Comments on What’s in stake with the EU Economic Semester? 58

The 21stof October 2015 was the date when the Collegium of European Commissioners agreed on the proposed package of measures aimed at deepening the European Monetary Union (EMU). One of the four key goals predicted by the Package, was a revamped European semester.

In accordance to the definition of the European Commission, the European Semester is an annual cycle of “economic policy guidanceand surveillance“. Having in mind very developed and complex economic policy within the Union, it is not a big issue for this entity to provide the “economic guidance” for its member states. It has been already doing it through various instruments. What makes the big surprise in the previous definition, is the fact that there is not involved the financial part of the instrument which is with high intense inherited to its implementation. However, even bigger potential problem of the definition could be the word “surveillance”. Who does the EU monitor? How does it do that? Are there any other alternatives to those instruments? Are they efficient in practice?

The European Semester begins around November each year with the publication of two key economic reports: the Annual Growth Survey and the Alert Mechanism Report. Afterwards, in March, the EU leaders meet in order to review the AGS and AMR and develop the common direction of fiscal and structural policies, in general. Also, the Commission makes a specific single-country reports, with numerous recommendations in economic and financial areas, respectively, based on the agreed policies.

The next step when the EU institutions actively engage into this issue is the Winter part of semester which approximately occurs during February (with an extension to March), when the member states report to the Commission on the achieved results and on what are the planned reforms to implement, in accordance with the previous specific report(s).Also, at the European Council level, prime ministers and/or presidents of the member states adopt economic priorities based on Annual Growth Survey (AGS), which has been published earlier.

The EU`s member states are then implementing those priorities and recommendations during the Spring part of the Semester (April and/or May). It is of high importance for the instrument, to respect timing and commitments during the fiscal year. Even though the Semester does not match with the fiscal and calendar year in general, it has its own dynamics, as shown on the photo bellow.

Despite the fact that this instrument has been created in order to monitor and guide the Member states of the European Union, it also was established to keep and preserve the economic and fiscal stability across member states of the Union. It is not possible to give a strict answer to the question in which level it prevails, but there can be for sure several views offered. First, there is a national level in terms of budgetary monitoring process and fiscal stability inside a single state and the second, the existing efforts for unifying the European economic system in general.

The European Semester would not be possibly sustainable without the main stakeholders which partially are taking coordinated action(s) in order to achieve its fundamental goals. Those are the European Commission, European Council (and the Council of ministers), Member states and the Parliament.

Though, the EU Commission have the biggest role within this instrument, other institutional structures are partially involved within the process. At the end, there is a one more actor included in this process. This is the Eurozone group, because most of the decisions and recommendations are made exclusively for the Eurozone member states.

There is a one key thing concerning the limitations of the European Semester. It is probably the only such economic instrument which regulates fiscal commitments and budgetary dynamics throughout the Union, in the supranational level. This claim could not be really justified, since there are some OECD recommendations for all its member states.

Limitations coming from the EU member states are coming in the shape of the passive protest of the EU member states which are not willing to respect the rules of the instrument. Some states (especially the UK, Denmark, Sweden and all other non-eurozone states) are denying to committing their obligations under the common aquis communitaire. This possibly can bring the new potential problems not only to the Eurozone, but to the Union as a whole.

Scientific researches show very pessimistic views on the topic. In the first line, they announce the possible break of the system. Their analyses show that the main limitation of the system is actually a non-discipline which the EU member states present.

According to the results of their researches, there is a very low reforms implementing index. 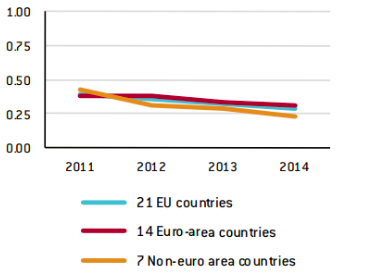 It varies from less than a half of percent down to 0.25, meaning that the highest recommendations fulfilment and implementing of the key public reforms among the EU member states, was extremely low. In the case of the best ranked states, it practically means that the concrete state achieved only one half of the total number of recommendations came from the instrument.

The European Semester was enacted in 2011 with the consent of the Council and the European Parliament to foster economic policy coordination, to enforce the overhauled Stability and Growth Pact and the new macroeconomic imbalance rules, and to achieve Europe 2020 targets. In analysis of the European economic Semester, we should be more careful, since these kinds of instruments are very tough to explore and predict its future. Hence, the main question to be provided with an answer should be whether the Semester is introduced in order to foster or to monitor the European economy in general?

What also creates the situation more complex is the paradox in which the European Semester becomes the European “Trimester”, since there is one more time element within the instrument, which makes the third element of it. This is the Spring part of the Semester, which has not been introduced at the first version of the instrument in 2011. These issues have not been important as it was to deter a key difference between the initial role of the Semester. It relates to the distinction between the original ideas on which it is based on. Some officials claim that it relates to the unifying of dozens European single national economies, while the academic community state oppositely, that it aims to discipline a single European economic entity, creating a tough-functioning system without the clear perspective.