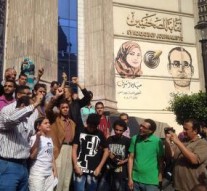 Today’s World Press Freedom Day is sadly celebrated in Egypt amid arrests, threats, confiscations, and injunctions. Journalists have been banned from treating certain topics and physically assaulted. Incidents have arisen after security forces have raided newsrooms.

The Journalist union announced the beginning an indefinite strike in the early hours of Monday morning, following security forces’ storming of the syndicate’s headquarters on Sunday night.

The syndicate denounced the move as illegal since it violates its charter, which states that  police are not entitled to enter the building whenever a union official is not present.

On Monday, dozens of people gathered on the steps of the union building and started chanting “journalists are not terrorists.” The open-ended sit-in will run through World Press Freedom day on Tuesday and into Wednesday.

Other trade union leaders were invited by the journalists’ union to join the sit-in to condemn the intrusion, as well as to protest against restrictions on freedom of assembly for labour organisers. A meeting of  hundreds of workers to commemorate International Workers’ Day were prevented by the police on Sunday.

Egypt’s Police Raid The Headquarters of The Journalist Union

On the same day, two reporters, Amr Badr and Mahmoud el-Sakka, were arrested after the Egyptian police raided the headquarters of the Journalist Union. The two journalists, who works for a website known as January Gate, are accused of organising protests to destabilise the country.

Egypt’s Police stated that only eight officers were involved in the operation. They also insisted that were acting on an arrest warrant for the two journalists and that they did not entered the building by force they. However, intervention by security forces was heavy handed, involved dozens of officers and resulted in a security guard being injured, according to some union members.

“The storming of the Egyptian Press Syndicate’s building by the Egyptian security forces on the 1st of May is a worrying development, and continues a trend of restricting space for civil society and the freedom of expression,  as manifested by the high number of arrests following the April protests,” said  a  spokesperson from the European External Action Service.

On 25 April, 33 journalists were arrested during anti-government protests sparked after the announcement of the transfer of Tiran and Sanafir islands to the Saudi Arabia during King Salman Abdul Aziz Al-Saud’s visit to Cairo in early last month.

“Those detained for expressing their opinion should be released and the law regulating assembly should be brought in line with the Egyptian Constitution,” the EU spokesperson added.

A  Leak from the Interior Ministry

Meanwhile, press representatives and journalist received a leak by the Egyptian interior Ministry, describing a plan against Egyptian Press Syndicate, its President Yehia Qalash and its board of directors. All local newspapers lead with the scandal and voiced their disdain.

The Interior Ministry’s plan aimed to intimidate and send to prison Yehia Qalash, together with other members of the opposition by fabricating evidence against them.

Yehia Qalash and his reporters would have been accused of covering two wanted criminals, namely Amr Badr and Mahmoud el-Sakka, while retired police officers were meant to appear on television to kick off a campaign against the Egyptian Press Syndicate.