Home / Economy / What role for the Green Deal of Europe? 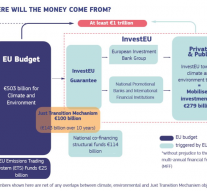 No Comments on What role for the Green Deal of Europe? 90

The newest Green Deal is an ambitious initiative striving to develop the European Union as the first climate-neutral bloc by the 2050 in the world. This initiative went to wave of mass critique as unjustified and unnecessary. Rather than classifying this idea as utopian, one could show more respect towards this relevant initiative which might achieve a global scale impact. The idea came at the very beginning of the new EU Commission’s mandate which kicked-off its commitment towards promotion of the EU as one of the major global players.

The EU Green Deal will be supported by multi sector comprehensive instrument. To be able to assist in the financial construction plan, the European Commission have announced the Green Deal investment plan, a one trillion EUR heavy fund which will fill the gap in terms of financing the project. As the EU Commission President Von der Leyen said, the idea that lies behind this investment plan is “to mobilise at least €1 trillion, which will show the direction and unleash a green investment wave”.

How will the main stakeholders achieve the rational balance between the climate/nature protection and the needs of some Member States to keep their industrial activities ongoing? What is the structure of this ambitious plan?

The structure of the plan

The European Green Deal investment plan is developed to support three main thematic areas: financing, enabling, and to be the practical support instrument. The main course on which this Green Deal is based upon, is striving to mobilize at least €1 trillion of sustainable investments over the next decade. A greater share of spending on climate and environmental action from the EU budget than ever before will crowd in private funding, with a key role to be played by the European Investment Bank. To be able to fulfil its second role “enabling”, the EU Commission stated that it will provide “incentives to unlock and redirect public and private investment”. Moreover, the EU will provide tools for investors by putting sustainable finance at the heart of the financial system, and will facilitate sustainable investment by public authorities by encouraging green budgeting and procurement, and by designing ways to facilitate procedures to approve State Aid for just transition regions. The very last characteristic of this plan is provision of the practical support during which the Commission will provide support to public authorities and project promoters in planning, designing, and executing sustainable projects.

In addition to the EU Investment Plan, the Commission plans to activate a Just Transition Mechanism which solely will consist of three main sources of financing: a Just Transition Fund, a dedicated just transition scheme under InvestEU, and a public sector loan facility with the European Investment Bank backed by the EU budget. In total these three funds will compel the 100 billion EUR used dominantly for loans to support the public sector. According to the EU Commission claims, this Mechanism will include a strong governance framework centred on territorial just transition plans. As explained in the Press Service of the Commission, to avoid that the supply of projects is unnecessarily restricted, InvestEU will not only support investment in projects in just transition territories (regions having an approved transition plan under the Just Transition Fund Regulation) but also in projects directly benefiting those regions. This is relevant in particular for transport or energy infrastructure projects that improve the connectivity of the just transition territories. Compared to the Just Transition Fund, it will also enable investments in a wider range of projects, in line with the broader eligibility of investments under InvestEU. Furthermore, the InvestEU will support financing, among others, to decarbonisation projects, economic diversification of the regions and social infrastructure but also projects for energy and transport infrastructure, including gas infrastructure and district heating.

In its detailed description and explanation of the programme, the Commission underlines that Member States will complement their Just Transition Fund allocation from their resources under the European Regional Development Fund and European Social Fund+ through a transfer mechanism. They will also provide national resources to complement the Union resources in form of co-financing in line with cohesion policy rules. The level of Union co-financing will be set according to the category of region in which the identified territories are located. This will bring the overall resources for the Just Transition Fund between €30 billion and €50 billion.

No matter how this idea is giving the advancement into the global “fight” against the climate change, these developments should not be undermined by the external (f)actors which already casted their objectives against the Investment Plan. The EU’s stance towards the other major players such as the PR China, India, USA, and Brazil is that balanced multilateral approach needs to be achieved as soon as possible, in accordance with the national capacities to address these changes.