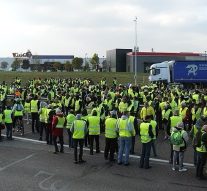 No Comments on Gilets Jaunes 197

The so called “yellow vests” movement has stepped in deafeningly in the European political scene. The name comes from the vest motorists are obliged to carry in their vehicles under French law in case of a breakdown. Everything has begun with a petition on Change.org, a website where everyone could create an account and propose his/her own petition. The petition was created the 29th of May by Priscillia Ludosky, already defined as “la tête pensante des gilets jaunes” (the thinking head, the mind, of yellow vests).

However there was not a movement yet. The milestone could be a viral video by Jacline Moraud: a 51 years old Breton  accordionist and hypnotherapist that made a five minutes video in her own house against Macron. That video, posted on Facebook around the mid October, has exceeded six million views.

Another important turning point matches with another video. Eric Drouet, truck driver from Melun in the Seine-et-Marne region, is also quite expert about selfie video making and creating Facebook groups. The 26th of October Mr. Drouet creates an event on Facebook called “National Block Against the Rise of Fuels Price”, where he announces the 17th of November as the “D-Day”. More than two hundreds thousands have clicked on the event page.

During these days the yellow vest becomes the protest symbol, for two reasons: on one hand it means the kind of job and the way they live; on the other hand it represents the danger of the state.

The 17th of December there was a huge massive protest across the whole country. Moreover, there were many others small rallies during the whole week. At the end of the first week more than 280,000 people took part, two people were killed and more than 600 people injured.

One week later they went to Paris. For the second time in a row there were strong clashes with the police, officials said 19 people were injured in the clashes, including four officers. Forty people were arrested.

The yellow vest also protested on the 30th of November in Brussels. 60 people under police custody and 4 arrested among the participants, more or less 250 people. Who are protesters? In France there are 18 million people taking their own car every day to go to work. Furthermore we have to add truck drivers and farmers.

For many protesters fuel price increase means losing purchasing power. An increase of the 30% of fuel price has a huge, direct, remarkable consequence on these people’s life. Moreover, Macron reaches more consensus in the big cities rather than in the countryside. The resignation of the Environment Minister Nicolas Hulot, who has claimed loudly against Macron, accusing him of doing just green washing instead of properly facing the climate issue, also played a role. That’s why this part of France is so angry. They are the only ones paying the ecological transition.

The yellow vests movement is already crossing the French borders. Last week, many small protests took in place in Nuremberg, Munich, Hannover and at Check-point Charlie in Berlin and in other cities. Two German reporters and activists, Lars Wienand and Frank Stollberg, said that in many of these events far right wing elements were present. The German far right wing would be trying to insert itself and lead the German yellow vests movement.

Also in Italy there is a new yellow wave. Currently it is as not massive as in French and is still smaller than in Germany. A Facebook group called “Italian Yellow Vest Council” has been created last week and it is not the only one. The Italian version claims for lower fuel price as well, but also to reduce/eliminate motorway tolls. Moreover, and that seems to be just Italian, they clearly back their national Government.