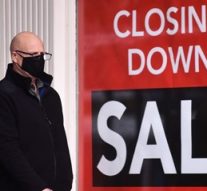 No Comments on Was 2020 an economic nightmare for the EU? 30

Olympic Games were postponed, many European countries quaranteened for the very first time, what else could surprise? New Year’s Eve and Christmas will be different this year. Could any country ever have imagined forcing their population spending the holidays’ season on their own, alone? Nobody could have not. Well (again), the year of 2020 had the courtesy to provide with that experience. How will the EU survive the economic end of this sui generis year? Will the closure of shops significantly influence the EU’s economy?

The corona virus pandemic has once again warned everyone that nothing is more important than health and that there is no money with which it can be bought, but also that the world in a state of emergency can function, in somewhat changed circumstances. Shopping malls in Europe will have a problem finding new tenants, writes CNBC, quoting consultant Jan Knifen, who says that expectations are that 1,000, ie one third of shopping malls, will be closed by the end of next year. The list of big brands that have decided to reduce the number of stores and concentrate more on online sales is growing day by day. The British brand Moonsoon has announced the dismissal of workers and the closure of shops, restaurant chains such as Frankie & Benny’s and Garfunkel’s have also announced the dismissal of 3,000 workers.

Although shops are the ones that suffer the most, along with the most affected catering sector, financial institutions have not been spared either. According to Kirney’s study, 25 percent of bank branches in Europe or 40,000 branches could be closed in the next three years. The study showed, writes Business Insider, that in the same period, 70% of account opening, deposits and loans will be done not at the counter but over the Internet. This is already the case in some countries, 70% of clients in the UK, Norway and Sweden have already switched to online banking altogether.

The automotive industry is also suffering the consequences, some factories have not yet opened all their plants, in Great Britain this sector is facing the worst sales since 1952. Only 20,000 cars were registered on the Island in May, significantly less than in May last year, when there were 184,000 newly registered vehicles. Sales fell by 51.4 percent in the first five months of this year, reports the BBC, but the industry is hoping for a recovery in the coming period, when all showrooms will open. Undoubtedly, some businesses will disappear if they have not already, others will recover in the next few years, trade will certainly survive, the only question is in what form. The pandemic helped customers understand that it is possible to buy online without being deceived by anyone, and it obviously opened the eyes of traders who realized that selling over the Internet could reduce their costs and increase their profits.

Luxury brands from Chanel to Louis Vuitton have raised the prices of most of their most desirable products to make up for lost profits during the closure due to the coronavirus pandemic, Reuters reports. Haute couture houses have announced brisk business in South Korea and in a key, Chinese market, where stores began opening in March, thus compensating for the decline in Europe and the United States, where the easing of restrictive measures has only just begun. Chanel announced that it would raise the prices of its prestigious handbags and smaller leather items from five to 17 percent, because the prices of certain raw materials jumped due to the pandemic.

It can be concluded that industries, for instance, products that can be classified as essential, are growing, while obviously non-essential ones will record a decline in sales. The first impression is that a large number of medium and small stores that found themselves in a state of emergency, in a relatively short time of several weeks, tried to move their business online. This means either opening an online store (e-commerce shop) or trying to sell product or service on one of the social networks. Some have gone a step further where they try to add value to every purchase – they personally bring products to the doorstep, give advice on use, cooking, exercise…