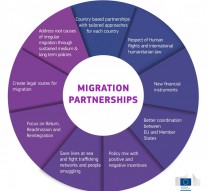 No Comments on Commission established plans for “Migration Compact” 460

Yesterday, the European Commission established plans for a new Partnership Framework to manage migration, as well as mobilise and focuse EU action and resources on external front.

On Tuesday 7 June, plans for a new Partnership Framework to better manage the EU external aspects of migration were unveiled by the European Commission and the High Representative, Federica Mogherini.

Moving from the European Agenda on Migration, the proposals set various priorities such as saving lives at sea, enabling migrants and refugees to stay closer to home and, in the long term, helping third countries’ development in order to address the root causes of irregular migration.

“To stop the unacceptable loss of life in the Mediterranean Sea and bring order into migratory flows, we need to rethink how the EU and its Member States join efforts to work together with third countries,” said First Vice-President Frans Timmermans.

In order to do so, tailor-made partnerships will be negotiated between the EU and  key third countries of origin and transit, such as Jordan, Lebanon, Niger, Nigeria, Senegal, Mali and Ethiopia. The EU also plans to increase its engagement with Tunisia and Libya.

As for the new partnership framework, Timmermans continued by saying that the Commission will proceed by: “starting with a first group of priority third countries, compacts tailored to the circumstances of each of them will mobilise all our policies and tools to achieve these objectives, tapping into the EU’s collective influence in close coordination with Member States and focusing our resources including through the swift deployment of €8 billion over the next five years. We will also work on an ambitious External Investment Plan to help create opportunities and tackle the root causes of migration.”

Due to economic and geopolitical factors, Europe is undergoing an unprecedented flow of irregular migrants, which is also fuelled by unscrupulous smugglers.

“For this reason, we are proposing a new approach for strong partnerships with key countries. Our goal, while staying focused on saving lives at sea and dismantling smugglers’ networks, is to support the countries that host so many people and foster growth in our partner countries,” High Representative/Vice-President Federica Mogherini added.

The proposals calls for a focused engagement of EU assistance and policies on the short term objectives , namely save lives in the Mediterranean Sea, increase rates of return to countries of origin and transit, and enable migrants and refugees to stay close to home and avoid people taking dangerous journeys.

Furthermore, it aims at breaking the business model of smugglers who fuel migration by exploiting the desperation of vulnerable people worldwide. The further deployment of European Migration Liaison Officers to priority source and transit countries will help coordinate EU cooperation. EU Cooperation Platforms on migrant smuggling will be finalised in key locations.

Under the proposals, the establishment of a UN-led global resettlement scheme will receive support from the EU, as so to contribute to fair sharing of displaced persons and further discourage irregular movements. Indeed, the Commission realised that both alternative legal pathways to Europe and greater humanitarian reception capacities closer to the  places of origin are needed to dissuade people from taking these dangerous journeys.

The Commission also plan to increase financial allocations aimed at tackling the root causes of irregular migration and forced displacement, together with flexibility for deploying the programmes. A smart mix of short-term resources and long-term financial instruments will be used under the new Partnership in order to deliver immediate results but also to deal with fundamental drivers of migration.

“We are ready to increase financial and operational support and to invest in long-term economic and social development, security, rule of law and human rights, improving people’s life and tackling the drivers of migration,” Mogherini continued.

Taking the form of tailored “migration compacts agreements“, the renewed partnership with third countries will be developed according to the situation and needs of each partner country – whether they are a country hosting many displaced persons, a country of transit or a country of origin.

While delivering compacts with Jordan and Lebanon in the short terms, the EU intends to agree further ones with Ethiopia, Mali, Niger, Nigeria and Senegal. Engagement with Libya and Tunisia will also be increased.

Mogherini concluded by saying that: “Our duty, and also our interest, is to give people the chance and the means for a safe and decent life. It is a responsibility Europe shares with the rest of the world: we can only do it together.“