Home / Economy / What is in the 2016 EU country-specific recommendations? 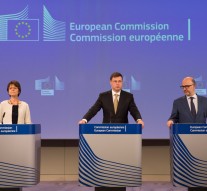 No Comments on What is in the 2016 EU country-specific recommendations? 88

In May, the European Commission proposed 2016 country-specific recommendations (CSRs). Despite previous recommendations, this year the Commission: 1) proposed fewer recommendations with a focus on key economic and social priorities; 2) provided more time and more opportunities to engage and communicate with member states and stakeholders at all levels; 3) added a greater focus on the euro area challenges and on the interdependence between economies, in line with the agreed recommendation for the economic policy of the euro area.

The Commission aimed to make the dialogue with each country stronger.

This approach was announced in November 2014 in the Annual Growth Survey 2015. So, in February, the Commission presented its analysis to the member states in the form of country reports.

In May, the Commission presented CSRs based on the dialogues we just analysed.

The Commission noted that Member States have advanced reforms over the last year. The most significant progress concerns financial services and market policies.

In contrast, more progress could have been expected in generating a business and employment friendly and regulatory environment, increasing female labour market participation and reducing barriers in the services sector.

More progress in implementation is identified for Member States experiencing imbalances than for Member States without imbalances. It’s due for the Commission to the larger need for reform, stronger policy dialogue and, in some cases, in response to stronger market pressure.

Concerning the Macroeconomic Imbalances Procedure (MIP), Croatia and Portugal have to correct their deficit. They should implement their reform agendas rigorously and in a timely manner. The countries’ national reform programmes (NRPs) of both seems adequate and confirms their intention to correct their excessive imbalances.

What step has the Commission taken under the Stability and Growth Pact?

The Commission has also taken a number of steps under the Stability and Growth Pact.

First, it recommends to the Council to close the Excessive Deficit Procedure (EDP) for Cyprus, Ireland and Slovenia that have correct their deficits (below the 3% of GDP Treaty reference value in 2015) and the trend is considered durable. If it will be confirmed, their deficits are forecast to remain below 3% of GDP in 2016 and 2017. For Cyprus, this would mean an exit one year ahead of the 2016 deadline.

Second, Belgium, Italy and Finland appear to be at variance with the debt reference value but the analysis of other relevant contest factors suggest that the Stability and Growth Pact should be considered as currently complied with.

Nevertheless, for Belgium, Italy and Finland the Commission adopted reports under Article 126 (3) TFEU.

In November the Commission will review the assessment of Italy by the analysis of information on the resumption of the adjustment path towards the medium-term budgetary objective for 2017 becomes available.

Portugal and Spain have to correct the excessive deficit in 2016 and 2017 respectively, by taking the necessary structural measures and by using all windfall gains for deficit and debt reduction. The Commission will exam the situation of these two Member States in early July under Article 126   TFEU. 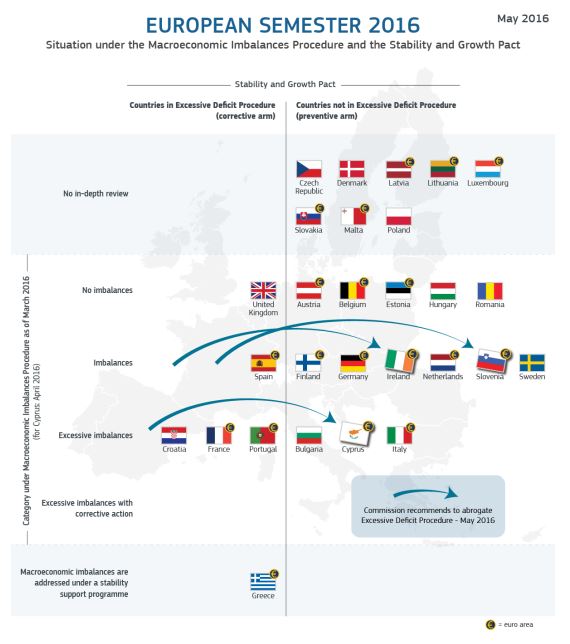 Greece (which is currently subject to a stability support programme) is not covered by 2016 CSRs and does not receive any country-specific recommendations. The assessment of Greece’s compliance with its objectives is done within the framework of its own programme.