Home / Economy / Does the EU have a capacity to survive another veto? 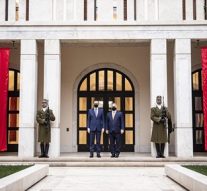 No Comments on Does the EU have a capacity to survive another veto? 67

On November 16, another veto has shaken the EU-27 bloc. This time, central European Member States have vetoed a multibillion package dedicated for the Covid19 pandemic relief. What happened actually and what are the consequences for such move? Does the EU have a capacity to survive recurring series of vetoes in the near future? This analysis reveals a bit.

Hungary and Poland blocked the adoption of a seven-year EU budget and a plan to recover from the Corona virus pandemic due to a new mechanism that envisages the denial of EU funds to countries whose governments are undermining democratic standards and the rule of law. At the meeting of the representatives of the member states of the Union, the right-wing governments of Hungary and Poland vetoed the so-called “package” for recovery, in order to prevent the establishment of a new mechanism, according to France Press.

Hungarian government spokesman Zoltan Kovac confirmed on Twitter that Budapest had vetoed the Union’s budget. His statement that “Hungary, as Prime Minister Viktor Orban warned, vetoed the budget, because we cannot support the project in its current form, which connects the assessment of the rule of law with budget decisions. This is contrary to the conclusions of the July summit”, Kovac said. The budget of 1,800 billion euros, for the period from 2021 to 2027, was agreed a week earlier than the veto was enforced, after several months of difficult negotiations, by the representatives of the 27 EU member states and the European Parliament. The adoption of the budget, which includes a “package” of 750 billion euros for recovery from the pandemic, requires the consent of all members of the Union.

The prime ministers of Poland and Hungary, Mateusz Morawiecki and Orban, who are accused by Brussels of collapsing the rule of law, have threatened to veto the budget and recovery plan, in a letter to EU leaders expressing disagreement with the introduction of the new mechanism. The leader of the European People’s Party, Manfred Weber, the largest political group in the European Parliament, said that the principle of the rule of law is neutral and applies to all members of the Union, regardless of whether they are in the east or in the west.

On November 26, the Prime Minister of Poland, Mateusz Morawiecki, confirmed during the conversation with German Chancellor Angela Merkel that Warsaw remains with the veto it put on the proposal of the EU budget, because the rule of law is one of the conditions for obtaining funds. Poland and Hungary have blocked a budget proposal of 1.8 trillion euros, including several billion euros for recovery from the coronavirus pandemic. “I confirm our readiness to veto the budget proposal, if we do not find a solution that is good for the EU as a whole, and not only for its individual members,” Moravjecki wrote on Facebook. The EU is currently investigating the authorities of Poland and Hungary for what they call in Brussels undermining the independence of the judiciary and the media in those countries.

European Commission President Ursula von der Leyen suggested on Wednesday that they address the EU Court of Justice on the issue. “If in doubt, there is a clear path: go to the Court of Justice of the EU and check the new rules there. This is where we resolve our disputes over legal texts. And not to the detriment of millions of Europeans who urgently need help,” von der Leyen told his speech at the plenary session of the European Parliament. “We are talking here about violating the rule of law to the detriment of the EU budget. It is hard to imagine anyone in Europe being against that principle,” von der Leyen pointed out. But Gulyas said they have no reason to go to the EU Court because “there are no accepted criteria for the rule of law”. He added that the proposal to allow the right to appeal was “a good move by the German government”, but also that it was not enough.

This veto comes in a very delicate moment for the EU’s existence. This 2020 is shaped heavily by the Brexit process, during which the EU has lost one of its most important Member States – the UK. Besides, what furthermore remained as unsolved, is the Covid19 crisis which exactly was the crossroads and the very first test for the EU’s functioning after the Brexit. Even with this process going on, the EU has lot more burdens on its agenda, therefore this veto is even more dangerous than any other decision made by the Member States in a regular political life. While the negotiations still last, both Hungary and Poland remain firmly stick to their attitudes which might prolong and deepen the internal crisis the EU faces with.