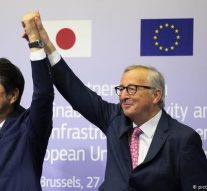 No Comments on The EU-Japan economic cooperation 36

The EU inaugurated itself as a world’s leading economic superpower. By establishing hard relations with global players, the EU opened towards far East, where it started cooperation with Japan, PR China, South Korea, the three most important countries in this part of the globe. The EU-Japan cooperation was initiated in late eighties, but in economic terms, one could conclude that 2019 is among the key years to determine the economic cooperation between the two sides. On February 1st this year, EU and Japan’s Economic Partnership Agreement entered into force. What does it bring into the economic ties and will it have any further implications towards the European economic outlook?

As Deutsche Welle reported, the European Union and Japan signed a free trade deal last year, and agreed to build infrastructure in sectors such as transportation, energy and digital services to improve connectivity between Europe and Asia. The agreement is part of a broader EU plan to strengthen economic and cultural ties between the two regions. The infrastructure building will be backed by a €60 billion ($65.48 billion) EU guarantee fund, which the bloc says would be used to attract further investments from development banks and private investors.

This Agreement regulates several key economic cooperation areas such as agriculture, food safety and sanitary and phytosanitary measures (animal and plant health), Market Access, precautionary principle, public procurement, regulatory cooperation, and sustainable development. The Agreement reduces unnecessary barriers in trade among the two sides and also focuses on solving non-tariff measures, as some Japanese technical requirements often make it more difficult to export safe European products. This agreement will go a long way in ensuring that such rules are more transparent and fair for our exporters. The best way to secure such a level playing field is by ensuring that requirements are in line with international standards. The EU Commission claims that this deal comes with guarantees such as the sensitive economic sectors protection, the EU public services safeguarded, while the precautionary principle upheld EU’s right to regulate its own businesses.

The European External Action Service emphasizes that this trade agreement is a “progressive trade agreement with some of the strongest commitments to environmental protection, labour and sustainable development ever contained in a trade deal”. It contains all the relevant protections included in CETA, and goes beyond them in some areas. The deal is the first and only international trade agreement to include a clear commitment to fight climate change and support implementation of the Paris agreement. It includes a specific article on climate in the Trade and Sustainable Development chapter. The EU has persuaded Japan to take a clear commitment to pursue the ratification of the fundamental International Labour Organisation’s Conventions which it has yet to ratify.

Over the last decade, the EU Member States have managed to put forward their import and export activities with Japan to the positive sign. In 2008, total EU bloc’s import from Japan was 76.5 billion EUR, while it exported only 42 billion EUR. In 2018, the situation was quite more positive for the EU as it was exported 65 billion, and imported goods less than 10 years ago – worthy 70 billion EUR. According to the Eurostat data, Japan is the EU’s sixth export market, while this country is the EU’s seventh import partner.

All of these data clearly demonstrate that high level ratio between the two major world’s trading partners are increasing gradually. Their further developments are to be facilitated through the political and cultural cooperation. What the future of this cooperation would look alike is quite hard to predict. However, it is up to the analysts and researchers to contribute in people-to-people exchange beside the pure capital and investments activities in EU and Japan respectively.