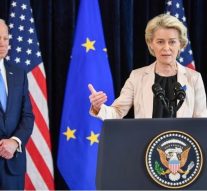 No Comments on The EU-US energy relations 27

Since Russia invaded Ukraine, the European Union started a race against time to reduce its dependency on Russian gas. On March 25th 2022, the US President, Joe Biden, and the European Commission President, Ursula Von der Leyen, met in Brussels and agreed to work together to support Europe’s energy security and to reduce its energy dependency on Russia. In their joint declaration, Von der Leyen and Biden announced a Task Force for Energy Security chaired by a representative of the White House and a representative of the President of the European Commission.

For reducing its dependency on Russia, the EU believes the Liquefied Natural Gas (LNG) can  contribute to enhance the diversity of gas supplies and improve energy security in the EU. According to the EU Commission  LNG import to EU from the US was 22 billion cubic metres (bcm) in 2021.At the meeting, the US ensured volumes would increase by at least 15 bcm in 2022. By the end of August, the EU’s LNG import from the US had already reached 40 bcm.  This result has been reached at the end of August 2022, four months in advance of what was planned in the agreement.

Already in 2018 US and EU signed an agreement where both agreed to strengthen the EU-US strategic cooperation on energy and to facilitate trade of LNG. The EU Commission issued a detailed communication on August 9th of 2018 about the increasing volumes of LNG arriving in the EU since the first US delivery to Portugal in April 2016 : “Since the arrival of the first U.S. LNG carrier in the Portuguese port of Sines April 2016 and today, EU imports of liquefied natural gas from the U.S. have increased from zero to 2.8 billion cubic meters”.At the moment, United States, Australia and Qatar are the largest LNG global exporters in 2022. As in US and Australia new plants will come on stream on the next few years, the global liquefaction is set to further increase.

At the EU-US summit on June15th 2021, both agreed to accelerate a climate-neutral future, to ensure a just transition that leaves no one behind, and to lead by example through becoming net zero greenhouse gases economies no later than 2050. On his recent speech at the Trade FAC meeting, the Vice-president Valdis Dombrovskis, told that the EU plans to announce a “Transatlantic Initiative on Sustainable Trade”. “We want to ramp up cooperation in ways that boost trade and accelerate the green transition in a mutually beneficial way. For example, for the meeting in Maryland we have agreed to work on standards for Megawatt Charging Systems. We of course also discussed the US Inflation Reduction Act”, Dombrovskis said.

However, “Many of the green subsidies provided for in the Act discriminate against EU automotive, renewables, battery and energy-intensive industries. These are serious concerns for the EU, which I, and many of my colleagues, have raised repeatedly with our US interlocutors”, he added.

Then, Dombrovskis underlined the importance of being united more than ever in these particular times: “in the current geopolitical context, and keeping in mind our shared green targets, we should be building alliances in these important sectors – be that batteries, renewable energy, or recycling.  The last thing we should be doing is creating unnecessary distractions or potential new disputes”.

The Vice-president of the EU Commission warned “against the danger of conflating the Inflation Reduction Act with our broader relationship with the United States. These are separate tracks. The US has been a true ally to the EU in shoring up support to Ukraine, among many other issues”.