Home / Editorial / Europe and the Biden doctrine: a new beginning? 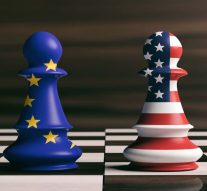 No Comments on Europe and the Biden doctrine: a new beginning? 43

After four years of Trumpism and “America First” doctrine, last February President Joe Biden declared at the Munich Security Conference that “America is back, the transatlantic alliance is back”.

Since the very first days of his mandate, the President has rehabilitated multilateralism, considered by Donald Trump as a kind of cage for the USA.

The first effects of the new relations between the European Union and the United States were visible in the sanctions, imposed on the same day by Washington and Brussels, on the loyalists of Russian President Vladimir Putin involved in the case of the dissident Alexei Navalny. The crisis with Russia has then worsened until the accusation of being a killer addressed to Putin in recent days.

The return of the “precious alliance” and multilateralism was greeted with relief by the leaders of the EU institutions. “After four long years, the EU has a friend again in the White House“, commented the president of the Commission, Ursula von der Leyen, on the occasion of the Inauguration Day.

How will relations between the US and the European Union change with the Presidency of Joe Biden? We have tried to give some possible answers in this issue of NEU.