With the overwhelming victory of “OXI”, sixty-one percent of Greek voters rejected austerity policies and sent the Prime Minister Alexis Tsipras and EU leaders back to their seat – or rather back to the gorge of negotiations. Too much has been said and written on the economic, social and political consequences of the Greek crisis, but one point is worth being restressed: overturning Clinton’s slogan, “It’s not just internal affairs, stupid”.

Most obviously, Greece’s fate may set a new path for the unity of the EU, the foundations of its political project and the tense balance between all European capitals. However, the very roots of the crisis have largely overshadowed the “Grexit” possible implications beyond European borders. At NEU we believe such debate should not be confined, and so here we are with some heads-up of the tornadoes that might be scattered from the Greek butterfly.

Balkans’ back-step: Athens has steadily been a champion of Balkans integration in the EU. Greece played a leading role in the sub-region, trying to engage all partners in sharing best practices and hastening the pre-accession dossiers with Brussels. Notwithstanding Greece’s unresolved dispute with FYROM/Macedonia, most of its governments have been engaged in defusing nationalist and irredentist pushes in the neighbouring countries and facilitating the democratization process since the outskirt of the conflict. The only exception, again was Skopje, who already seems ready to exploit Athens’ weakness and join NATO with the internationally recognized name. In the worst case scenario, a Grexit could totally alter the eastern boundaries of the EU: adding even more pressure on Romania and Bulgaria – no less troubled partners – Greece would become a second-tier country in border and migration cooperation, further exposing the Balkans to the severe migratory pressure stemming from Syrian and Iraqi conflicts. 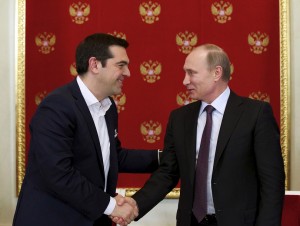 Russia’s cold hug: all analysts in foreign policy were definitely not surprised in witnessing Moscow’s outreach to Athens. Being the cross-road between the Black Sea and the Mediterranean and the Balkans and Middle-East, Greece’s strategic capital is invaluable. Amid the prolongation of EU sanctions due to the Ukrainian crisis, Tsipras went in official trip to Moscow, Greece’s main trade partner, to promote national industries and hold bilateral strategic discussions. One of the more rumored talks was about Putin’s offer to set the track of the “Turkish Stream” (a natural gas pipeline that should bypass Ukraine, and therefore sanctions regimes) through Greece, to the advantage of the Hellenic job market. It is very unlikely that Moscow would offer substantive financial assistance despite its own current struggle with sanctions and the fall of oil prices, nevertheless, a closer relationship between Russia and Greece would definitely alter the sub-regional balance, especially due to Athens’ membership in NATO.

Graccident in NATO: notwithstanding the mounting budgetary pressure since the beginning of the crisis, Greece has been one of the few NATO members who exceeded the 2% GDP target in defence spending. Military conscription is still in place because of the frozen conflict with Turkey on the partition of Cyprus, thus resulting in a major factor for compliance, but such stance was naturally less and less supported against the cuts in welfare spending. Syriza has widely rallied against this traditional trend in national foreign policy even by calling for Greece’s pull-back from NATO. Tsipras and his foreign policy spoke-person only softened their stance ahead of the general elections, but it seems likely that Athens will progressively minimize his role of “security producer” against internal priorities. Most important, a Grexit would be a major blow to NATO’s strategic unity in Eastern Mediterranean, where it has been ensuring the presence and command of its military instalments.

Stay with the USA: the naval base in Souda, Crete, is unarguably the most relevant asset that USA are holding ahead Middle-Eastern shores. As Washington keeps reverting its strategic presence towards Asia, the need for stronger allies becomes a matter of priority. Due to Greece’s good relationship with both Israel, Egypt and Middle-East countries, and its moderating presence vis à vis Turkey’s more assertive yet distant stance, the USA cannot let Athens’ being critically wounded. Indeed, President Obama’s involvement in the Greek crisis has been increasing as negotiations entered their most critical stage, and even sided Athens’ position on loosening the burden of austerity. If on the one side it is perfectly coherent with Obama’s successful expansive agenda, his firefighting calls are also a result of USA’s need to avoid any major shift in the strategic balance in the region.

Damage done: the result of the Greek crisis until now is that both the wider debate and the perspectives in Brussels policymakers’ sphere have dramatically narrowed. Regardless the physiological slow-down of the integration process, the EU has become inward-looking and weaker against the international community. Even though some damages of are likely to persist in the long term, Brussels is still in time to avoid a “security black hole” in the Eastern Mediterranean and re-establish a pragmatic foreign policy that would keep building progresses in the Balkans, reassert a proactive stance in EU-Turkey relations and avoid crippling down its strategic options from the Aegean to the Red Sea.

We wonder how all of this is likely with a severely-wounded Greece.