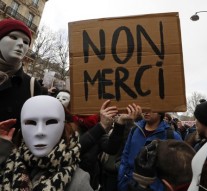 No Comments on French Vox Populi: A Fight For Working Conditions 70

Last April, several protests occurred in major French cities for working conditions, as French officials had announced the prescription of new, reformed packages of labour legislation. What is French ado about?

In the late nineteenth century, the working class was in constant struggle to gain the 8-hour work day. Working conditions were severe and it was quite common to work from 10 to 16 hour a day in unsafe conditions. As early as the 1860’s, working people agitated for shortened workdays without a cut in pay, but it was not until the late 1880’s that organised labour was able to garner enough strength to declare the 8-hour workday.This proclamation was without consent of employers, yet demanded by many of the working class.

On 27 April, BBC announced that Venezuela will no longer have a five-day working week. This news has exploded worldwide as an example of “how should it be” lifestyle, and was strongly supported by the French people, who claim that their labour rights and laws have fallen into the deepest crisis so far. However, it turned out that this news was quite incomplete and incorrect since Venezuela was forced to do so as a temporary measure to help it overcome a serious energy crisis.

As of the beginning of 2016, the French officials hesitatingly announced the possibility, and furthermore, the “very important needs” for the prescription of new, reformed packages of labour legislation. By the end of April, several protests in major French cities occurred. Most of them turned into violent and open conflicts with local police forces. So, what is so controversial in the proposed legislation and should the French vox populi be eventually justified in any sense?

The new labour package, what is inside?

Even though not many French people knew the real outcome of the proposed measures at the beginning of the whole process, now it has become clearly visible. The main groups of syndicates organised within the wider French labour market have mutually agreed to start a common protest all across France. Negotiations at first with officials have not succeeded because the Government rejected any bigger influence into new reform package creation.

The French Government have introduced reforms that would:

The most visible proponents of the bill – the French Prime Minister, Mr Valls. and Economy Minister, Emmanuel Macron – have urged backing for the proposals, pointing out that they would bring France into line with practice in the rest of Europe. “The terrible thing would be the status quo,” Mr Valls said.

But labour protections and the 35-hour week are sacred totems in the French left, and polls show strong opposition to the reforms. An online petition against the law has been signed by more than a million people.

It seems that those ideas are unacceptable to the large majority of workers in France. According to the French National Statistics` Office (INSEE), around 20 percent of all businesses open or close their doors every year in France. As a result jobs are created and jobs disappear.

In a country like Germany or England, being dismissed or laid off is not really a problem because you can quickly find another job.

But by blocking measures that reduce unemployment, opponents of France’s labour reform bill guarantee that a major cause of insecurity continues to exist, all in the name of fighting insecurity. The other source of insecurity in France is the so-called CDD (Contrat à Durée Determinée), namely temporary contracts.

But opponents of the labour reforms, who are not even daring to take the plunge, do not want to hear about getting rid of CDDs and moving to a single job contract, because they adamantly refuse to touch the CDI (Contrat à Durée Indeterminée),in other words, permanent contracts – even though the handing out of these permanent contracts has become the exception in France. It is almost as if the opponents of the law wanted to keep the insecurity in France because this is their only trading power. By nature, businesses are insecure. That is basically the most important reason for the nowadays’ protests all across France.

What remains at the very end?

Truly, history has a lot to teach us about the roots of our fights for better labour conditions. When we remember that people were shot so we could have the 8-hour day; if we acknowledge that homes with families in them were burned to the ground so we could have Saturday as part of the weekend; when we recall 8-year old victims of industrial accidents who marched in the streets protesting working conditions and child labour only to be beaten down by the police and company thugs, we understand that our current condition cannot be taken for granted – people fought for the rights and dignities we enjoy today, and there is still a lot more to fight for.

The sacrifices of so many people cannot be forgotten or we will end up fighting for those same gains all over again.

For more information on International Workers Day and the employment condition in the EU, read “Workers Day Across the EU: What is the Employment Situation?“