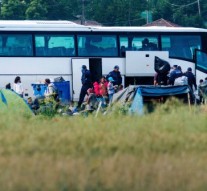 On Tuesday at dawn, Greek authorities began the gradual evacuation of Idomeni camp, Greece’s largest informal refugee site on the border with Macedonia.

Around 8,400 migrants currently call this place home. They were stranded there after The Former Yugoslav Republic of Macedonia closed its border with Greece to prevent them from heading north.

Mostly from Syria, Iraq and Afghanistan, residents will be gradually transferred to nine camps across the province of Macedonia in northern Greece.

Recently finished, those organized camps were built in six weeks by the Greek army with the support of companies contracted to the defence ministry.

The operations at Idomeni Camp

Attempts by Greek authorities to transfer people from Idomeni to formal camps on former military bases have been going on for weeks.

On Tuesday morning, 700 policemen have entered the camp, whose access is now limited. Journalists were stopped at a police roadblock a few miles away on a motorway junction leading to the nearby village of Idomeni. They are now excluded from the area.

The Guardian reported Greece’s migration spokesman, Giorgos Kyritsis as saying that the police would not use force, and that the operation was expected to last about a week to 10 days.

The humanitarian organization Médecins Sans Frontières, present at Idomeni for more than a year, has confirmed that there had been no violence on Tuesday morning.

“So far it’s peaceful, and people are just moving,” Loic Jaeger, the charity’s head of mission in Greece was reported as saying by the British Newspaper The Guardian.

However, many refugees have been reluctant to leave, since they still hope that the border will reopen, while others plan to cross with the help of smugglers. More are simply scared of being locked inside hurriedly completed government-run centres.

The Conditions of Refugees in Greece

Nearly a million people escaping war and poverty at home have passed through Greece, the vast majority arriving on islands from the nearby Turkish coast

However, after Balkan and European countries shut their land borders to such massive flow of refugees and migrants, more than 54,000 people have been trapped in financially-struggling Greece.

According to a report recently issued by the Council of Europe, Greek asylum system lacks the capacity to process applications. It has been seriously deficient and in real need of extensive additional resources for many years. As a result, the insufficient staffing of the Asylum Service generates long delays in the asylum procedure.

For more information on the current condition of Asylum Seekers in Greece, read “EU-Turkey Deal Does No Good for Migrants in Greece.”

The report also states that asylum seekers are at serious risk of refoulement, due to persisting obstacles to accessing the asylum procedure before the Asylum Service.

Asylum seekers do not receive sufficient information about what the asylum process will entail. Many have received little documentation of their registration or none at all, or have been obliged to sign papers without the help of an interpreter.