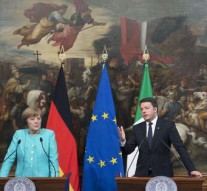 No Comments on Migrant Crisis: Renzi and Merkel Agree on Next’s Move 52

Italy and Germany agree on how Europe should tackle the crisis of migrants and both oppose any move to fence off borders, but they are in disagreement regarding the way to fund proposed initiatives.

On Thursday, bilateral talks took place in Rome between the German Chancellor, Angela Merkel, and Italian Prime Minister, Matteo Renzi, which were dominated by the Immigration issues.  Both leaders agreed that more needs to be done in order to help African states stop migrant flows across the Mediterranean Sea.

“We are committed to further encouraging and implementing the agreement with Turkey, there is a strong convergence between Italy and Germany for an immigration approach full of human values and dignity  and able to offer a serious, credible and long-term political proposal for Europe as a all,” stated Italy’s Prime Minister following his bilateral meeting with Merkel.

For more information on EU-Turkey Agreement on Migrants, read “EU-Turkey Deal: Is Europe Doing the Right Thing?” and “EU Deal with Turkey on Migrants Condemned by the Council of Europe“

According to the leaders of the two countries, Europe risk reawakening old nationalist ghosts unless a common migration stance is found.

“Europe is in a very fragile moment, but it is our future and we must learn how to deal with these challenges,” Merkel said during the press conference, adding on migrants that: “we cannot abandon each other, we cannot close the boundaries that are not external borders, we have to be fair with each other, we must share the burden.”

Renzi reiterated his fierce disagreement with Austria’s plan to build a fence at its border with Italy to prevent migrants from crossing the Brenner Pass and reaching wealthier North.

“We expressed our total opposition to, and, in some ways, our shock over the position that has been taken by our Austrian friends,” Italy’s Prime Minister said. According to him, Merkel shared his view on the matter.

Last month, during his visit in Rome, Austrian Interior Minister, Wolfgang Sobotka, said that as many as a million migrants were about to cross the Mediterranean from Libya this year. Italy says the figure is likely to be much lower.

What is the fence at the Brenner Pass? How is the situation of the refugee in Austria? Read “Austria Builds Barriers: Brenner Pass Closed for Migrants” and “Austria Shuts its Door to Migrants” for more information on these topics.

So far this year, Italy welcomed almost 29,000 migrants who came by boat, roughly 1,000 more than in the same period last year. After the EU deal with Turkey has dramatically slowed the flow of people reaching Greece,  humanitarian organizations say, the main route for asylum seekers coming to Europe is now through Italy.

“We  must understand that these borders are our own, regardless of our position. The Commission proposed several options on how to participate in burden-sharing, “Merkel added, stressing that” we cannot have a common Europe that rejects any form of burden-sharing. We cannot, compared to countries protecting our borders like Italy, Greece, Malta, Cyprus, we cannot abandon them. “

How Italy’s Migration Compact Plan will be financed?

Italy last month presented the so-called “migration compact“, proposing that Europe should offer financial incentives to African nations. These incentives would help them to develop their own economies and discourage possible migrants from leaving in search of a better life.

However, even if Renzi and Merkel agree on how Europe should face the migrant crisis and oppose any move to fence off borders, they are in disagreement concerning the way to fund the proposed initiative.

Merkel said she did not agree with  Renzi’s approach, which suggests to finance the plan by issuing common EU bonds.

“Even though there are different views on the financing,” Merkel told, “we have the same opinion on the overall effort.”

Read “EU Commission Welcomes Renzi’s Proposal on Migrants” and “Plans to reform the Common European Asylum System and border management presented by the EC“for more information on the plans and proposal recently submitted at the EU-level to face migration.

Specifically mentioning Niger, Germany’s chancellor said that one billion Euros would be needed to help African states halt the immigration exodus, but “if we concentrate on the European budget, we will find (the money).”

The source of financing is irrelevant for him, Renzi said, as long as a solution was found to stop the  migrants influx , that have shaken European unity and contributed to the rise of far-right parties in many EU countries.

Italy’s Prime Minister said: “What interests me are results. With or without eurobonds, the important thing is that the migration compact gives resources to help Africa, which is not happening now.”