Home / Migration / A missing migration agenda after the German elections 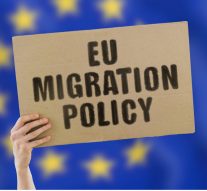 The elections held in Germany last week did not change much the way the German political elite perceives the issue of migration at the European level. Despite the growing number of crises taking place on a global level, such as armed conflicts, interstate conflicts and other crises leading to migration, it seems that the European political public has completely forgotten this problem that is at its doorstep.

Four years ago, European leaders condemned then-US President Donald Trump’s plan to build a wall on the southern U.S. border with Mexico. “We have a history and a tradition to celebrate when walls are torn down and bridges are built,” warned Federica Mogherini, the then head of EU foreign policy. However, Europe is now accelerating the construction of its own walls for fear of future migrant crises. European Union governments are currently worried about the influx of Afghans and hope to persuade Afghanistan’s close neighbors to keep those fleeing the Taliban.

The United Nations High Commissioner for Refugees (UNHCR) has warned that up to 500,000 Afghans could leave their homeland by the end of the year. EU officials say they are considering investing billions of euros to encourage Afghanistan’s neighbors to keep refugees. The withdrawal of the Americans from Afghanistan will probably cause an even more significant crisis, which will refer to the increased influx of refugees across the Balkans to Central and Western Europe.

However, the topics that dominated during the election campaign in Germany did not in any way shed light on this issue or the problems concerning not only refugees but also economic migration. Neither the Christian Democratic Union, nor the SPD, nor the Greens, nor the Free Democratic Party have foreseen in their pre-election program what the European Union should do in the event of an increased influx of migrants caused by a sudden crisis. Austrian Chancellor Sebastian Kurz said on Saturday that a potential wave of refugees to Europe must not happen. French President Emanuel Macron recently said that Europe should “anticipate and protect itself from the migrant wave” from Afghanistan.

The council is being followed by other European national leaders who want to prevent the mass entry of Afghan refugees into Europe. They hope to avoid a repeat of the 2015-16 migrant crisis, when more than a million refugees from the Middle East, sub-Saharan Africa and Central Asia entered Europe seeking asylum, which influenced European politics and encouraged the rise of populist nationalist parties. At last week’s extraordinary meeting in Brussels, the interior ministers of the 27 EU member states agreed “to work together to prevent the recurrence of uncontrolled, large-scale illegal migration that they have faced in the past”.

Because of all this, it is not surprising that some media call Europe a fortress for fear of a new influx of migrants. How the coalition will be formed in Germany after the federal elections remains to be seen, but one thing is for sure, and that refers to the new problems that the federal administration will have to face, given the increased influx of migrants and economic and refugees to Germany. Given the fact that the issue of migrants and refugees did not appear in the election campaign, it is difficult to assess how Europe, politically and economically led by Germany, will respond to these problems this fall. Taking into account the historical circumstances from the not so distant history of only a decade earlier, one can get the impression that Europe has not learned much about the sudden admission of migrants to the glory of the real territory or the articulation of common positions by all member states on this issue.