Home / Migration / The unpredictable relationship between migration and climate change

In these days, world leaders are attending Paris climate Summit with the aim to unite all the world’s nations in a single agreement on tackling climate change,to keep global warming at 2C over pre-Industrial Revolution levels. But, while politicians are searching for a compromise to stemming green house gas emissions, thoughts should turn also on how to deal with the complex issue of climate change-induced migration.

Environmental factors have always acted as a driver of human mobility. However, with emerging awareness of the rate and magnitude of climate change, interest in the question of how environmental change is likely to affect population movements in the future has grown significantly over the last decade. Indeed, over coming years, migration flows related to climate change are expected to increase, particularly in the world’s poorest countries, because of the increasing frequency and severity of extreme environmental events, such as drought, sea level rise, floods and hurricanes. These events not only damage infrastructure, homes and the means for livelihoods, but can result, both directly and indirectly, in increased human migration and displacement. 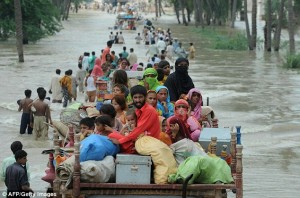 All changes to regional weather systems may reduce access to essential resources such as water, as well as affecting livelihoods, especially fishing and farming. Finally, these impacts, either in isolation or combined, may result in conflict, again displacing people.

In face of the increasing migration context of climate change, combined with other factors such as war or poverty, not all governments are equipped to deal with its effects on population. This is particularly true if we think that the international legal status of those displaced by environmental factors is unclear.  Indeed, there is currently no recognition that people displaced for environmental reasons be given refugee status. Populations displaced by floods, droughts and other environmental hazards do not have the same legal protection as other types of migrants, such as refugees fleeing war, protected through the UN’s Geneva Convention relating to the status of refugees. Nevertheless, while it is not clear that an expanded definition of a refugee under international law that included environmental degradation as a “valid” driver of displacement would lead to benefits for all traditional and environmental refugees, some kind of international recognition is required to strengthen the issue on the international agenda.

In this context, the EU has recognised the problem of climate change related migration. For example, its 2013 document ‘Climate change, environmental degradation and migration’ highlights the need for developing a comprehensive policy to address environmentally triggered migration. Given its complexity, climate migration requires a comprehensive responses involving a broad range of issues and policies: climate change mitigation, disaster risk reduction, social policy, asylum and migration policies, development policies and humanitarian and civil protection policies. At the same time, due to the broad variety of patterns of migration and the diverse environmental pressures and capacity in non-EU countries, responses have to be tailored to local needs and conditions.

Thus, the Paris Agreement represents a unique opportunity for Parties to the UNFCCC to prevent and reduce climate change-related displacement by encouraging and supporting the planning and implementation of mitigation and adaptation strategies. This includes measures aimed at strengthening the resilience of climate vulnerable populations, supporting internal and cross-border migration as an adaptation strategy and, as an option of last resort, developing plan for relocation.

Joint reflections on the need for possible new measures should continue together with partner countries and other international actors; policies and specific strategies could be better targeted to more directly address the challenges of migration in the context of environmental change. Otherwise, if governments continue to move backwards on climate change, we should get ready for a much bigger refugee crisis before very long.