Home / Opinions / What does German recognition of Armenian Genocide mean? 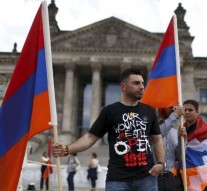 No Comments on What does German recognition of Armenian Genocide mean? 178

At a historic moment, on 2 June 2016, the German parliament approved a resolution declaring that the mass killing of Armenians by Ottoman Turks during WWI is in fact a genocide. The Germans were in no way innocent as to the genocide as they were allies of the Turks in WWI and they were aware of the Armenian Genocide but, by admitting to the genocide, in a way they also took responsibility for the 1915 killings. But why is this deemed to be a historic moment?

The recognition of the Armenian Genocide is still a thorny issue since Turkey occupies a very strategic position among the world powers despite the fact that the Armenian genocide is the second most-studied case of genocide after the Holocaust.

To date, only 43 nations provide some level of recognition of the event. Turkey still denies that the Ottomans killed up to 1.5 million of Armenians as part of an implementation of a genocide policy on various grounds like, for example, that deportations and death marches were simply a ‘temporarily relocation’ of Armenians due to security reasons or, that the Ottoman leadership did not in fact intend to exterminate the Armenians.

The Tragic story of Armenians under Ottoman rule

Nonetheless, what else can you call the kidnapping and execution of Armenians, sending Armenians to exile following death marches through the Mesopotamian desert without providing them food or water while being stripped naked and forced to walk until they die out of exhaustion, drowning some, crucifying others and burning some alive? What else can you call an obsession to convert Armenians to Islam, raping their women and forcing them to join Turkish harems or, serve as slaves while also kidnaping their children and giving them to Turkish families ultimately, leaving the Armenians stripped of their families and any property rights?

After all what we have here is a classic case of years and years of oppression under Ottoman rule. Armenia had come largely under Ottoman rule during the 15th and 16th centuries nonetheless, Armenians were never respected by the Turks; they were treated as dogs, they were spat upon, they were subjected to slavery and they were never seen as equals. Certainly, the Armenians sought reform but this only led to more violence as 1915 was not the first time the Armenian population was targeted. In fact, during 1876-1909, a series of massacres throughout the empire meant to frighten Armenians, cost up to three hundred thousand lives.

However, nothing matches the escalation of the violence that occurred during the years of WWI. In 1913 the Committee of Union and Progress (CUP) emerged at the head of the government embracing ultranationalistic ideologies which advocated the formation of an exclusively Turkish state and, as such, had plans to eradicate the Armenians. Throughout the spring and summer of 1915 the Armenian population was ordered to leave from their homes. Convoys consisting of tens of thousands were driven hundreds of miles toward the Syrian desert. The deportations were disguised as a resettlement program. The brutal treatment of the deportees, most of whom were made to walk to their destinations, made it apparent that the deportations were mainly intended as death marches. The genocidal intent of the CUP measures was also evidenced by the mass killings that accompanied the deportations. The convoys were frequently attacked by bands of killers specifically organised for the purpose of slaughtering the Armenians. The government even authorised attacks to be carried by convicts released from prison. There were no provisions made for the feeding of the deported population and deportees were denied food and water in a deliberate effort to hasten their death.

According to Raphael Lemkin’s idea of genocide, which also formed the legal basis of the Nuremberg Trials, it involves ‘the extermination of racial and national groups – against the civilian populations of certain occupied territories in order to destroy particular races and classes of people, and national, racial or religious groups’. This perfectly encapsulates the above-mentioned situation and if someone is so blind as to believe otherwise then s/he might as well believe that the earth is flat.

The impact of Germany’s recognition of the Armenian genocide

Nonetheless, it is crucial for anyone to wonder about the impact of Germany’s recognition of the Armenian genocide would have to the already unstable relationship between Europe and Turkey. The vote has undoubtedly heightened German-Turkish tensions with Turkey threatening for further action at a critical time when Turkey’s help is vital in stemming the flow of migrants. Turkey’s Prime Minister, Binali Yildirim, actually blamed a ‘racist Armenian lobby’ for the results of the vote and the Turkish President Erdogan, claimed that Armenians are being used as ‘blackmail’ against Turkey. Erdogan even went further by impliedly threatening not to keep the promises made under the controversial agreement between EU and Turkey in mid March since he mentioned that Turkey is currently hosting tens of thousands of Armenian citizens as economic migrants and that arguably Turkey can send them back to Armenia, just like Europeans are sending refugees back to Turkey.

The EU-Turkey agreement was seemingly an agreement to address the overwhelming flow of smuggled migrants and asylum seekers traveling across the Aegean from Turkey to the Greek islands but, at its core was an agreement to tackle the unchecked arrivals into the European Union. The EU, in return, has agreed to increase resettlement of Syrian refugees residing in Turkey, accelerate visa liberalisation for Turkish nationals, and boost existing financial support for Turkey’s refugee population. Nonetheless, at the same time, the European Union seems to be in breach of both EU law and international law based on the argument that the agreement allows asylum seekers to be expelled without examining their claims individually.

For more information on this topic, read “EU Deal with Turkey on Migrants Condemned by the Council of Europe” and “EU-Turkey deal: is Europe doing the right thing?“

Furthermore, Turkey is clearly unsafe for the refugees; it has not fully signed up to the UN Refugee Convention, it has broken international law by sending back refugees to Syria and does not in practice offer most Syrians genuine access to legal work. Furthermore, a cleaner working at the Nizip Refugee Camp located in Turkey, has made the news since it became known that he had been raping children aged from 8 to 10 even though the refugee camp was praised for its high standards by Chancellor Merkel.

In a Europe Union that is slowly sinking not only because the European citizens have lost their faith in it but also because it has been handling the migrant crisis in a completely inept way, for how long is it going to keep making deals with the devil? It has wilfully turned its eye against the Armenian Genocide and now that Germany owned up to its past mistakes, Europe needs to stand back and support this. People need to comprehend the atrocities that occurred during the Armenian Genocide whether Turkey agrees with this or not.