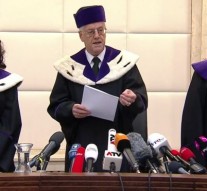 The constitutional court of Austria has annulled the result of the  presidential elections hold last May, just a week before Alexander Van de Bellen was due to be sworn into office.

The constitutional court of Austria has annulled the result of the country’s presidential elections a week before Alexander Van der Bellen  was due to be sworn into office.

Norbert Hofer of the far-right Freedom Party was slightly ahead of his rival, but it was Alexander Van der Bellen who won the Austrian Presidential Election thanks to the postal voting, which accounts for 750,000 ballots, roughly 12% of Austria’s 6.4 million eligible voters.

However, after an investigation had revealed formal irregularities in the count of the vote in several constituencies, Court president Gerhart Holzinger announced on Friday that the run-off vote between would have to be repeated across the whole country .

Several counting centres had begun to process postal votes on the eve of the election, it had emerged during the investigation. The Austrian electoral law requires instead votes to be counted only on the day after the elections.

Election scrutineers in some centres had signed minutes of the vote count without having read them, revealed the statements of witness in court . However, there has  been no evidence proving that the outcome of the election had been actively manipulated.

Europe’s Migrant Crisis at the Core of the Election Campaign

At the core of the election campaign was Europe’s migrant crisis, which has seen asylum-seeker numbers soar.

The far-right Freedom Party Campaign sound bite mainly was: “To those in Austria who go to war for the Islamic State or rape women – I say to those people: ‘This is not your home.’”

Besides being boosted further by fears about the migrant crisis in recent months, Norbert Hofer, a 45 years old Aeronautical engineer, has profited from deep frustration with the established parties of the centre left and the centre right in Austria.

While the Austrian presidency is a largely ceremonial role, the outcome has been seen as hugely symbolic as Hofer’s victory, could have an impact far beyond Austria’s borders by possibly giving momentum to far-right and Eurosceptic parties in other EU countries.

Alexander Van der Bellen, 72 years old, professor of Economics and former leader of the Greens,was due to be sworn as prime minister in a week’s time, on Friday 8 July. He prevailed over his opponent with an electoral slogan that could be resumed as: “I’ve experienced how Austria rose from the ruins of World War Two, caused by the madness of nationalism.”

A Former Nazis Party was Close to Conquer the Power

The outcome of this election was one of the most surprising and exciting of all Austrian recent history because, for the first time since World War Two, both the main centrist parties were knocked out in the first round.

Concern over Hofer’s victory was expressed by both Presidents of the European Commission and the European Parliament, Jean-Claude Juncker and Martin Schulz.

Besides its outcome,  he Austrian Presidential Election raises a warning flag for all European Governments.  For the first time in the history of a EU count ry, a political party founded by former Nazis have never been so close to conquer the supreme institution of the Republic. Therefore, as it happened in Austria, a peaceful, rich and democratic nation, there is no guarantee that a far-right party could democratically take the power elsewhere.