Home / Employment and Social Affairs / Can Greece Reforms Lead the Way Out of the Vicious Cycle? 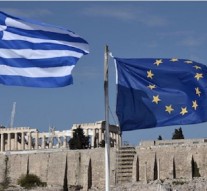 No Comments on Can Greece Reforms Lead the Way Out of the Vicious Cycle? 67

On 9 May, Greece reforms were approved by Parliament in Athens to overhaul pensions and increase taxes amid street protests: the bill passed by 153 votes in favour to 144 against.

This controversial reform, worth 5.4 billion Euro in budget savings, seems as the toughest since the debt crisis began in the country.

Despite this commitment, still no approval has been reached on the 9 May Eurogroup meeting of finance ministers over the allocation of the next tranche of aid to Athens in the framework of the third rescue (the next loan for Greece should worth around 5.7 billion euro, but now it seems it could be even doubled).

An agreement on a package was then confirmed by an EU official on Friday, but Greek authorities still have to adopt smaller new measures before the next Eurogroup on 24 May. 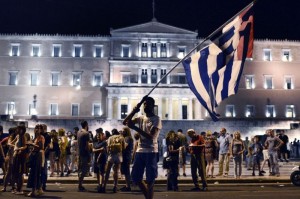 A man waves a Greek flag in front of the parliament in Athens, during an anti-austerity demonstration on July 10, 2015. Photo: AFP, Louisa Gouliamaki

The reform already approved by the Greek Parliament envisage a legislation that would raise social security contributions, increase income tax for high earners, set a goal of curbing early retirement and introduce a new national pension. It envisaged a new “national” pension of 384 Euro per month after 20 years of work.Furthermore it would cut supplementary pensions, which are paid out on top of statutory state pensions. As reported by Euronews, Athens has been told to cut its annual pension bill – one of the EU 28 member state’s most expensive – by 1.3 billion euros.

It could be highlighted that Greece has almost 2.7 million pensioners and a working population of around 3.7 million: the average gross pension is 960 euros per month, while the new legislation will cut higher levels of pensions by up to 40 percent. The general target is to reduce pension spending by about two percentage points to around 15% of GDP by 2019.

Greek authorities explained that the plan “seeks to create a system that on the one hand is sustainable and guarantees pensions of all citizens, and the other will have basic principle of social justice in view of the adverse economic conditions”. As far as the social security reform the Greek government tries to persuade Greek people that only a 10% of them are going to be affected.

But other reports highlight that over 1.2 million Greeks could be directly affected by the reforms in social security, while around 400.000 pensioners are going to face cuts in their income. Despite this reforms, creditors are also demanding a new set of contingency measures to ensure the country achieves agreed stringent fiscal targets by 2018.

It Is Time to End the Vicious Cycle 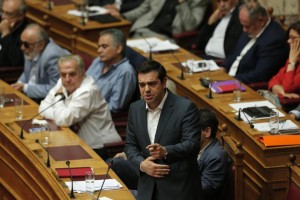 Greek Prime Minister Alexis Tsipras has said it is time to end the “vicious cycle” of cuts and to start talks with the eurozone on debt relief. He also appealed to his ministers for “hard and focused work” in the wake of a “beneficial” Eurogroup agreement, paving the way for another parliamentary vote on further measures that Athens must legislate to secure fresh rescue loans.

Sources close to the premier said the additional legislation would be drawn up in the coming days, waiting for the next Eurogroup on 24 May. The additional reforms should include the creation of a new privatisation fund, new rules regarding the management of nonperforming loans held by Greek banks and the introduction of “indirect” taxes, including levies on fuel, coffee and Internet connections.

However, by delaying their approval until now, the lenders have managed, once again, to push Greece towards bankruptcy.

“The IMF and German hawks want the patient dead. And they still want a Grexit”, Gianni Pittella, leader of the Socialist and Democrats group in the European Parliament, said in interview for “Euractiv.com”.

It appears true that although Greece is making many efforts to keep up with its commitments with the EU, they ask Greece additional measures with many sacrifices for the citizens.

On one side one could rightly consider that for many aspects the Greek social and welfare system would be unsustainable without a deep reform. On the other side all this should be framed in a period in which, Greece, together with Italy, keeps being the only EU country still bearing a consistent weight of immigration crisis.

In Greece there are at the moment almost 55.000 refugee; if the Turkey-EU migrant deal collapses – as seems probable after the EU Parliament position– it could be helpful to give the money for refugee to Greece instead of Turkey. At least it is quite paradoxical the idea (maybe quit) to give unconditional funds to a non EU member state as Turkey, while asking always more to an EU country on the frontline of the crisis as Greece.