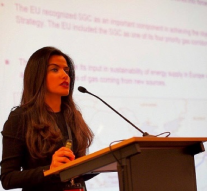 Global energy affairs and challenges are becoming more and more complex and intertwined with major political decisions. Severe violations of oil and gas agreements have significantly shaken the security of energy supply. Recently, there has been many conferences and events aimed at fostering fruitful discussions on these topics. The most recent one was convened at the premises of the National Assembly of the Republic of Serbia, on 26-27 October, and was dedicated to the energy security within the vast space on the Euro-Asian space. A leading research fellow, Gulmira Rzayeva from the Azerbaijani Institute of Strategic Studies gives us a short insight into her point of view of the current EU energy policy, Azerbaijani-EU relations and the significance of the TAP and TANAP pipelines.

NEU: Energy market is continuously growing and is being more complex. How would you describe the current situation in Europe when it comes to the energy market regulations and which obstacles to the creation of the energy union do you recognise as relevant?

Rzayeva: In the era of energy transition the European regulation has to be responsive and adaptive to all changes. The EU is actively taking all the measures to adjust the market regulations to the changing market when we talk about the future role of gas, to protect the interest of investors, producers, consumers, infrastructure owners and other market participants. This is especially important in the electricity sector where the reforms are expected to be realised, building lots of transmission system and integrating this sector with the natural gas market. The main obstacle in the creation of the single energy market concerns the different interests of the European countries when it comes to energy. Some countries are entirely reliant on one suppliers, while others’ supply sources are well diversified. Some countries have their own energy resource while others don’t. Some countries are happy with their relations with their major supplier Gazprom, while others are in conflict. Some countries have access to the alternative supply sources and routes, others don’t have such possibility. All these and other factors needs to be taken into account before any attempts to unite the energy market of Europe in one single market.

NEU: To what extent TAP/TANAP piplines influence the oil & gas supply of the European Union? Do you see any political game-changings in these regards?

Rzayeva: The main political game-changing with the Southern Gas Corridor is that this project received a tremendous political support from the EU and also the US and the last development is that Italy finally gave a green light for TAP to start construction works in the Italian territory.

This means that we should not expect any major delay with delivery of the project in a timely manner. This project will have a great impact on the natural gas market of the three European countries – Greece, Bulgaria, Italy- where the gas will flow. The Azerbaijani gas will help these countries to diversify their supply sources away from one single major supplier and constitute more than 1/3 of such suppliers’ market share in all three countries.

NEU: How would you describe the Azerbaijani position towards the EU in terms of its reserves of oil and gas?

Rzayeva: Azerbaijan is able to increase its natural gas production in the mid- and long-run. Azerbaijan’s gas demand is projected to be up to 11 bcm/year in the low case scenario, up to 12 bcm in base case and up to 13 bcm in the high case scenario by 2023, the peak production year in the country. According to our calculations, potential gas surplus volumes that may be available for uncommitted export will be around 12 bcm/year till 2027 if low case scenario in consumption is realised and around 7 bcm/year and 5 bcm/year in base and high case scenarios respectively. This means that Azerbaijan will be able to fill the pipelines and commit more export volumes to Europe.

NEU: Which major players in energy market would you underline as inevitable in European oil & gas supply?

Rzayeva: Al the major oil and gas companies in Europe are important for Azerbaijan for potential future cooperation in terms of upstream investments and potential Azerbaijani gas consumers. I would specifically mention the southeast European and the Balkan major players as these regions are of utmost importance for us in terms of potential market.

NEU: If you could imagine the energy supply infrastructure in 2050, how would it look like according to your views?